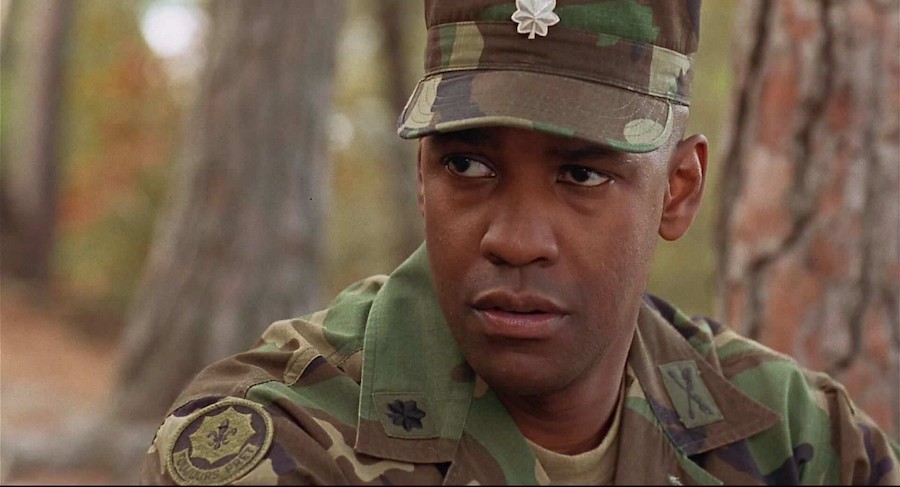 Courage Under Fire, director Edward Zwick's (Legends of the Fall, Glory) latest feature (an Austin-based production), begins with a CNN soundbite in which a war correspondent shakily describes the fighting that's taking place in the Persian Gulf: “Clearly I've never been there but [this] feels like the center of hell.” It has been said that war is hell, and Courage Under Fire does an admirable job of trying to capture that hell as well as the often painful process of soldiers trying to make sense of their experiences upon their return from the war. Denzel Washington stars as Lt. Colonel Nathaniel Serling, a commander of an armored tank battalion who mistakenly fires on his own men amidst the confusion of a night attack in Al Bathra. Reassigned to a desk job in Washington while “the incident” is investigated by the military, Serling receives for review the case of Captain Karen Walden (Ryan), a Medevac pilot whose efforts during a rescue mission resulted in her death. When the powers that be in Washington decide to award Captain Walden posthumously with the Medal of Honor for her “courage under fire,” Serling must interview the men in Walden's unit in order to determine her ability to function under pressure. In what become the most powerful scenes of the film, each of the surviving men in Walden's unit is questioned and asked to reconstruct the events that led to Walden's death. Fact and fiction become blurred as Ilario (Damon), Monfriez (Phillips), and the dying Altameyer (Gilliam) tell their stories. Inspired in part by Akira Kurosawa's film Rashomon, in which four characters describe the same crime, screenwriter Patrick Sheane Duncan (Mr. Holland's Opus) uses the soldiers' conflicted accounts to construct a portrait of the deceased captain. Serling finds himself facing his own demons about the war as he works to get at the truth behind the events leading up to Walden's death. When Zwick's story veers away from the soldiers and toward Serling's struggles, the film relies heavily on clichéd moments and ponderous silences. In particular, Serling's relationship with Washington Post correspondent Tony Gartner (Glenn) borders on parody when the two meet clandestinely in Washington in a scene straight out of All the President's Men. But the heart of the film concerns the character of Captain Walden and her abilities to command her men, an issue that is complicated (but not necessarily explored) in the film by the fact that she is a woman. Serling's investigation of Captain Walden's honor in Courage Under Fire reminds me of The Man Who Shot Liberty Valance, another film about the power of words and memory. In that film the newspaper editor of a small western town notes that “when the legend becomes fact, print the legend.” While the account of Walden's heroics doesn't necessarily move from legend to fact, it does push the bounds of truth and raise interesting questions about the function of truth for the survivors of war.