An American cousin to his Distant Voices, Still Lives, Terence Davies' The Neon Bible is an autobiographical memory film that ponders the childhood mysteries of growing up in a troubled family. Set in rural Georgia during the Thirties and Forties, this film (interpreted from John Kennedy Toole's novel) is like a fragmented dream, depicting the life of a callow young boy named David who must cope with a father tortured by failure, an emotionally fragile mother, and a future without much hope. Thank God for the brash and flamboyant Aunt Mae, a honky-tonk singer (gamely played by Rowlands) who comes to stay with his family and soon becomes his touchstone. Davies tells David's story in a striking series of tableaux and dioramas, all impeccably executed to the last detail. As in Martin Scorsese's work, there's a great deal of control in Davies' directorial style, to the point that it seems totally lacking in spontaneity. But unlike a Scorsese movie, The Neon Bible implodes rather than explodes. The passion, the anger, and the pain of experience are suppressed, never culminating in catharsis. Where this approach worked in the powerful Distant Voices, Still Lives -- which recounted a young boy's suffering at the hands of an abusive father -- it has less success here. There's no compelling connection between movie and audience; a palpable distance separates the two. And while fundamentalist Christian references in The Neon Bible are many, religion is an ultimately superfluous theme in the film, shaping neither character nor narrative. (One wonders if, in the course of things, the British Davies fully appreciated the film's Bible Belt milieu.) Like any carefully and precisely realized work, The Neon Bible earns your guarded admiration for its technique. If only it earned your empathy as well. 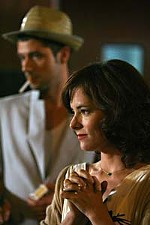 Broken English
Parker Posey gives a lovely, toned-down performance as Nora Wilder, the single, mid-30s Manhattanite at the heart of this romantic comedy. 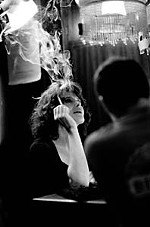 Paris, Je T'Aime
Eighteen short films by an international who’s-who of filmmakers make up this omnibus celebrating the joys and sorrows of love and Paris, organized by neighborhood.