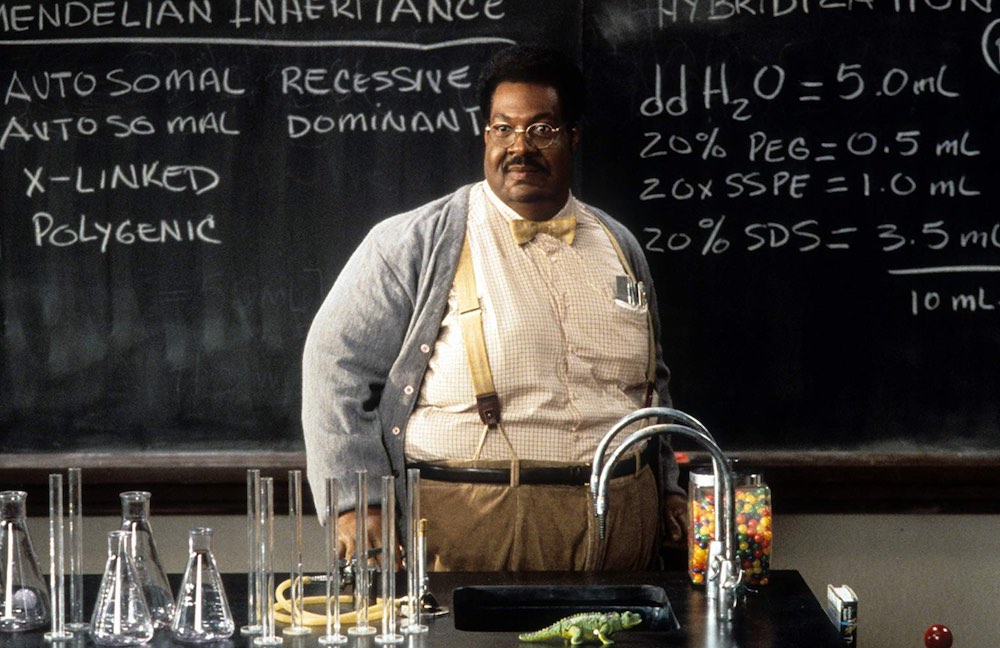 Shadyac's updating of the 1963 Jerry Lewis classic may be a bit more schizophrenic than anyone involved bargained for, bringing together a kinder, gentler Murphy with the misogynistic comic of the Raw years. College professor Sherman Klump (Murphy) is a man with more than enough problems: His research in genetic weight control is about to lose its funding, the dean hates him, he hasn't had a date in what may be forever, and he's large enough to provide stand-up comics with enough fat jokes for days. When a beautiful new teacher by the name of Carla Purty (Pinkett) arrives on campus, the painfully shy, woefully discombobulated Klump is smitten, and when she accepts his timid offer of a date, he's ecstatic. But the night turns out less than perfect when the comic at a local club ends up using Klump's massive girth as the butt of a thousand stinging jokes. Desperate, Klump turns to his research for a cure and ingests his untested formula for weight reduction, à la Jekyll and Hyde. Not only does the elixir work in the slim department, but it also gives him the confidence of a born womanizer and the nasty, rapier wit of one of Russell Simmons' more energetic performers. Thus Klump's obnoxious alter-ego, “Buddy Love,” is born. But once the genie is out of the bottle, Klump has a much harder time getting him back in than he expected. Touted as Murphy's big comeback vehicle, The Nutty Professor screeches from one gag to the next (unfortunately, a good 40 percent of the humor here is derived from a stunningly irritating series of fart joke overkill), though it's Murphy's take on the timid wallflower Klump that really shines. This gargantuan prof with a heart of gold is trapped inside 350 pounds of insecurity, and Murphy plays him wonderfully, with a sweet tenderness you'd hardly expect from a comedian better known as Axel Foley of the Beverly Hills Cop series. Klump is, far and away, Murphy's best role since Coming to America (and like that film, Murphy plays multiple characters here, including his entire family in several scenes), but once he switches over into the abrasive Buddy Love mode, it's nearly impossible to tell if it's Love who's really so horrible, or if Murphy and company are poking sly fun at the comic's outrageous past roles and private life. Shadyac brings the crazed flair he first sported as director of Ace Ventura: Pet Detective to the fore once more, cramming in gobs of juvenile humor in plenty of scenes and even an oddly Disney-esque opening bit involving thousands of escaping guinea pigs. But it's still very much a hit-or-miss proposition. Arguably better than the last five Eddie Murphy films taken together, The Nutty Professor still seems to be playing down to its audience much of the time, though you'd never know it to hear the gales of laughter erupting at the screening I attended. But then I suppose I grew out of fart jokes after Blazing Saddles came out.