Based on the wildly popular Italian comic book Dellamorte, Dellamore from Tiziano Sclavi's Dylan Dog series, Cemetery Man is the bastard progeny of George Romero's Night of the Living Dead and any number of Fellini films. It's compelling, bizarre, and distinctly Italian in its stylish mixture of sex, violence, and scattershot plotting that only Dario Argento could truly love. Indeed, director Soavi is a well-known disciple of Italy's reigning master of horror, and it shows in every camera setup, fluid crane shot, and color-drenched scene. Everett plays Francesco Dellamorte, the gravekeeper at the Buffalora Cemetery, who not only has to keep the grounds up to par, but also has to deal with an increasing number of the recently-departed rising from their graves seven days after their death. Called “returners” by Dellamorte, they pop up from time to time with neither warning nor explanation and must be dispatched once more with a blow or bullet to the head. (Just once, wouldn't it be interesting to see a zombie film in which the only way to kill the dead is by, say, trimming their nails, or perhaps piercing their tongues?) When our hero falls for a lovely widow (Falchi) at a funeral he's just finished, he manages to woo the lovely woman despite her grief and ends up making love to her atop her husband's grave. True to form, the husband promptly rises from the dead and kills his wife before Dellamorte can stop him, forcing the gravedigger to wait out her eventual return and grapple with all sorts of shady ethical questions that result from such a paradox. Aided and abetted by his faithful assistant/sidekick Gnaghi (Italian opera/rock star Hadji-Lazaro), Dellamorte ends up divvying most of his time amongst pining for his lost love, blowing the heads off an increasing number of returners, and pondering the nature of death. And then there's the bizarre subplot involving the semi-retarded Gnaghi's love for the severed head of the Mayor's wife that keeps things going when Dellamorte proves too angst-ridden to hold the interest of anyone but a 16-year-old Smiths fan. Dellamorte, Dellamore was a curiously Italian concoction, and this film version holds true to the crazed mix of sex, ultraviolence, and philosophical meanderings of its source material. American audiences may scratch their heads in bewilderment at much of what goes on here, but the film is still a genuine original when taken as a whole. A scene where Dellamorte casually, almost unconsciously, picks off the returning dead one by one as he idly chats on the phone is one of the strangest and most bizarrely humorous I've ever seen, and Soavi's directing is becoming more cohesive with every film he makes (his last two outings were The Church and The Sect). Now that's Italian. 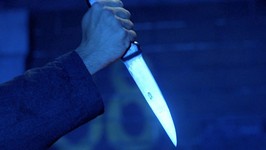