A few hours after the assault, Valerie Solanis walked up to a Manhattan beat cop, handed him a revolver, and said, “I shot Andy Warhol.” As confessions go, hers was terse and matter-of-fact, not at all the lurid tell-all that one might expect from a movie trumpeting these words. Yet, Mary Harron's movie turns out to be anything but a sensationalistic bio-picture; it neither sanctifies nor demonizes the shooter or her famous victim. What the movie accomplishes is something trickier: It treats its two principals, Solanis and Warhol, with respect and humanity. Gone are the simplistic stereotypes of the deranged man-hating author of The S.C.U.M. Manifesto and the vain clown-prince of Pop Art. In their stead are remarkably psychology-free portraits of two cultural rebels whose contributions lent brilliance to the Sixties. The film leaves the notoriety of these individuals intact. But here, in addition to being a violently deranged, gun-wielding, one-woman Society for Cutting Up Men, Solanis is also shown as visionary radical feminist-separatist whose seditious theories also include overthrowing the government, the money system, and various other vestiges of male domination. Warhol, too, is seen as more than that tomato-soup-can painter and celebrity whore; the movie shows the pioneering artistry and wit that permanently rearranged our perceptions. We get to see the silver-screen Warhol, the human reflecting pool who was a magnet for creative brilliance. Solanis experienced that gravitational pull, though her brilliance and sociopathy would become forever entwined. I Shot Andy Warhol shows us the Solanis who turned tricks, went to college, lived on the street, and wrote a play and political tracts; a Solanis who wanted Warhol's sponsorship and who desired and won entree into his fabulous circle of Factory life; a Solanis possessed with humor, romantic lesbian longings, ambition, lucidity, and… paranoia, anger, and violence. Lili Taylor's performance is the soul of the movie; she steers our feelings for Solanis through a broad range of contradictory emotions. The honesty of her performance is aided by everything that surrounds her in the movie: the wealth of other players who uncannily bring to life characters, both real and imagined (highlights include Jared Harris' Warhol, Stephen Dorff's drag queen Candy Darling, Michael Imperioli's acerbic-tongued Ondine, Coco McPherson's bare-breasted Brigid Polk, and Donovan Leitch's whip-dancing studio assistant Gerard Malanga). Prior to directing this film, Harron worked extensively in documentaries and television and as a journalist, and her research into the Warhol milieu has surfaced within all these different formats. Assisted by cinematographer Ellen Kuras (Angela, Swoon, Unzipped), not to mention contributions from former Factory habitués like John Cale (original music score) and Billy Name (creative adviser), the look and feel of “the scene” is said, by those in the know, to be hauntingly accurate. The movie's extraordinary Web site is also on-target: It uses Warholian graphic strategies to guide the user's foray into its universe of pictures, sound and movie clips, the complete “typewritten” S.C.U.M. Manifesto, and tons of other fascinating info and links. The address is: http://www.filmzone.com/warhol/. You may find that viewing I Shot Andy Warhol provides more questions than answers. 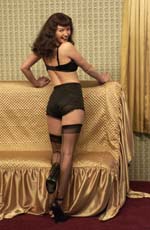