With a keen eye, Jane Campion relates the intricacies of adolescent friendship in her first feature Two Friends. Written by Helen Garner and originally made as a telefilm for Australian television, Two Friends is only now being released theatrically, 10 years after its original air date. The film begins with a funeral attended by Louise's (Coles) amicably divorced parents Janet (McQuade) and Jim (Leeder). They reflect on their own 15-year-old daughter as they express their condolences to the father of another teenaged girl, dead of an overdose. Through conversations and bits of dialogue we learn that Louise and her best friend Kelly (Bidenko) are no longer as close as they once were. Kelly's leaving school and her supposedly wild lifestyle have created a split between the two girls. Slowly, through Campion's direction and Garner's screenplay, we move backwards through time, watching the dissolution of Louise and Kelly's friendship in reverse. Bit by bit, we see pieces of their lives -- preferences and shared experiences that once united the two friends -- chip away at the bond of friendship. But the event most responsible for their separation seems to be Kelly's stepfather Malcolm's (Hehir) refusal to send Kelly to a private girls' school on the philosophical grounds that it reeks of elitism. Such dismissal of Kelly's intelligence and achievement obviously leaves its mark. While Louise's parents support and encourage her education, the dynamics between Kelly's mother Chris (May) and Malcolm affect Kelly's future. Campion's film goes beyond an investigation of fractured families, however. Its most poignant moments occur in the simplest scenes between the two friends: Louise reading and then discarding a letter from Kelly, who tries to explain her new life to her friend; the tense and awkward silences that follow miscommunications and misunderstandings. A spare film with complex and subtly developed relationships, Two Friends features nuanced performances that suggest the more developed characterizations that resound so effectively in Campion's acclaimed later films Angel at My Table and The Piano. 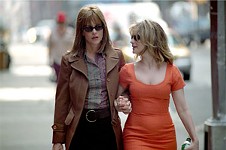