The Horseman on the Roof

The Horseman on the Roof combines a love story of epic proportions with an uneven if somewhat intriguing blend of action and black humor. Director Jean-Paul Rappeneau (Cyrano de Bergerac) brings to the screen French author Jean Giono's story about an Italian patriot whose love for his country is unexpectedly matched when he meets a French noblewoman during the spread of the cholera epidemic in early 19th-century France. An adaptation of the third novel in The Horseman Cycle, The Horseman on the Roof focuses on the character of Angelo Pardi (Martinez), a protagonist in the tradition of the French Romantic heroes of early 19th-century literature. As an Italian whose country has been taken over by the Austrian empire, Angelo escapes into France and works with the resistance movement to ensure liberty for Italy. When he is discovered by the Austrian government, Angelo must leave his home in Aix-en-Provence and notify other compatriots of the Austrians' pursuit. At the same time, sections of France are falling victim to the cholera epidemic. A frenzied rooftop flight introduces Angelo to Pauline de Théus (Binoche), a woman whose dedication to her own cause makes her the perfect partner for Angelo's journey. Despite an initial clash of wills, they soon realize they are each other's best ally. Together Angelo and Pauline make their way across the French countryside, warding off the cholera even as they stop to nurse its victims. Their partnership must end, however, when Pauline reveals that her quest involves her beloved husband (Freeman), whose age and experience ultimately enable him to make the most painful decision of his married life. The Horseman's grand narrative plays out against a magnificent natural backdrop captured by cinematographer Thierry Arbogast. Franca Squarciapino's lush costumes rich with color and texture further romanticize the love story between Angelo and Pauline. This cinematic beauty is in stark contrast to the ashen, horrific carnage of the cholera epidemic. Such marked differences add interest to The Horseman. Its action-packed opening sequence could spin circles around any Hollywood summer blockbuster while the film's overall pacing waxes and wanes, reminding one -- unbearably at times --of its epic nature. Still, the film's occasional bursts of wit (such as Gerard Depardieu's cameo) add punch to the story. Binoche is one of the few actors able to eroticize honor, and Martinez's turn as the noble hero brings a superhuman conviction to the role of Angelo. For some the film's mythic characters and lushly romantic scenarios may prove too suffocating on top of these heavy summer days, but for others the widescreen story that is The Horseman on the Roof may be the perfect accompaniment to summer's sleepy afternoons. 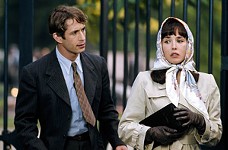