In the tradition of mockumentaries, budding director and former Playgirl magazine centerfold Dirk Shafer sets out to dramatize the events that occurred during his year-long tenure as Playgirl's 1992 Man of the Year. Man of the Year veers distractedly between reality and fiction, particularly in its confusing use of both real people and actors to play the significant “characters” in his life. Obviously mixing cinematic metaphors is part of Shafer's goal as he presents the “reality” behind his fictional life as a heterosexual centerfold, but in this film, the techniques appear haphazard and unmotivated. Man of the Year may not bode well for Shafer's directorial future, but the film does have its moments. Despite the film's stilted dialogue and wooden acting, Man of the Year does offer an interesting -- if cinematically rough -- comment on the guises that we all wear and the lengths we'll go to in order to maintain them. 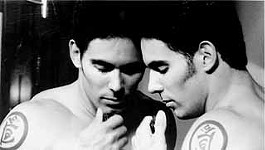 Circuit
This budget-conscious drama, set amid the throbbing, drug-fueled subculture of West Hollywood and its traveling “circuit” parties, is awfully well-intentioned and earnest. Writer-director Shafer (the ...