Once Upon a Time … When We Were Colored

With a story and a set of characters that are not seen on the silver screen with the regularity of, say, exploding motor vehicles, it becomes tempting to overpraise the eloquently titled Once Upon a Time … When We Were Colored simply by virtue of its heartfelt attempt to offer moviegoers a glimpse into a place and time rarely depicted on film. Still, despite its sincerity and ambition, the film is ultimately a humdrum affair, with its many good points often undermined by the kind of bland melodrama and heavy-handed sermonizing that is far better suited to television than to the cinema. Based on the autobiographical novel by Clifton Taulbert, Once Upon a Time … When We Were Colored details his experiences growing up in a small, rural community along the Mississippi Delta between the years of 1946 and 1962 -- a time when Southern America was still strictly, and forcibly, segregated. Yes, the ensemble acting is, on the whole, very good, and sure, the film's sense of time and place is effectively realized through Winnie D. Brown's gorgeous costumes and Michael Clausen's detailed production design, but, in his feature film debut, producer/director Tim Reid (formerly a regular on the long-running TV sitcom WKRP in Cincinnati and the star and co-producer of the short-lived Frank's Place) seems to have bitten off more than he can chew, resulting in a reasonably tasty dish that, nevertheless, proves difficult to properly digest. Although obviously a labor of love for Reid, his direction lacks urgency. While, true enough, it's refreshing to see a picture that accentuates the positive rather than the negative, Reid's insistence on playing it safe -- in addition to his almost perfunctory handling of the characters' harsher realities -- has severely crippled the overall power the piece might have had, with the film's messages instead hammered home in broad strokes via a hackneyed voiceover narration. Throw in a somewhat resonant, but ultimately unsatisfying, anticlimax that seems to end the movie before it's really finished, and you have a prime example of a movie that, despite several nice moments and excellent performances, is less than the sum of its parts. 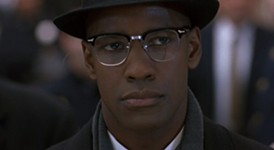 Malcolm X
Quick. Name at least one major magazine or publication that has not featured on its cover over the last few weeks the faces of either ...