Inexplicably well-received by both audiences and critics on its home turf, The Final Option turns out to be a surprisingly pedestrian police melodrama, marred by an overdose of soap-opera melodramatics and an overreliance on formula plotting. Ho Chi-wai (Peter Yung) is a young, hot-headed cop who decides to join the Special Duties Unit -- an elite division of the Hong Kong police force specifically trained to fight violent criminals -- after seeing his partner gunned down in the line of duty. As he and his fellow cadets try to survive the rigorous training necessary to become a part of the S.D.U., Ho finds his personal life becoming more and more chaotic. He becomes increasingly involved in a romantic relationship with a free-spirited young woman (Carmen Lee), who's finding it difficult to commit to a man whose job puts him in constant danger. What might have been a realistic, compassionate look at the lives, hopes, and dreams of Hong Kong cops has instead become the cinematic equivalent of a recruitment poster for the Royal Hong Kong Police, but without the nonstop excitement and comedy of Jackie Chan's Police Story films. Nope, writer/director Gordon Chan obviously feels that his film is above such “shallow” mayhem, but unfortunately, he fails to provide a sufficiently powerful drama to justify his pretensions, and the film's purported realism is, well, questionable, to say the least. An overrated item to be sure, but there is some effective suspense, and Hong Kong movie buffs may want to check it out to see Michael Wong's ridiculous performance as S.D.U. squad leader “Stone Wong,” which made him a cult favorite with Free City audiences in spite of his rather tenuous grasp of Cantonese. 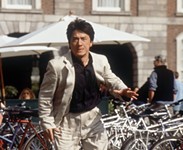 The Medallion
Furthering his American decline, Jackie Chan will wins no medallions for this stinker.