Sunset Park is an affectionate if lightweight and uneven testament to the power of communication, education, and human decency. The latest feature by Steve Gomer (Sweet Lorraine) stars Rhea Perlman as a Brooklyn high school gym teacher, Phyllis Saroka, who agrees to take over the coaching duties for the school's varsity basketball team in order to earn a nest egg toward early retirement in St. Croix. While the team is definitely not the Bad News Bears of basketball, they're a long way from the NBA. To complicate matters, Phyllis is no Pat Riley. Her initial attempts at coaching involve little more than blowing the whistle to signal the beginning and end of practice. Her advice to a player who's fouled out of the first scrimmage (“Stay in but be careful”) makes painfully obvious Phyllis' need for some after-school sports tutoring. Once it becomes apparent that she also needs to learn the game in order to earn the respect of the players, Phyllis crams by way of books, videos, and viewing professional games. Each step toward earning respect from players such as Shorty (Fredro Starr), Butter (James Harris), and Busy-Bee (De'Aundre Bonds) involves only a slight progression, however. Many obstacles, such as Shorty's criminal past and the psychological difficulties of Spaceman (Terrence DaShon Howard), remain in her path. This steady but difficult climb toward the conference title is one of the film's stronger points; Phyllis is shown working to overcome the limitations of a team consisting of individual young men who need varying amounts of guidance, education, and support. Additionally, many of the young actors, such as Starr, Harris, and Bonds, give fresh and funny performances as young students struggling to define their own dreams as well as break out of social stereotypes. While some of the dialogue in screenwriters Seth Zvi Rosenfeld and Kathleen McGhee-Anderson's script plays humorously onscreen, many lines ring hollow in their attempt to develop sympathy for the characters. Perlman's performance alternates between appealing tough love and irritating spunkiness, although this unevenness also may be attributable to the script. Although the film runs sticky like molasses through a few key scenes, individual performances and a general air of good cheer make Sunset Park an occasionally engaging narrative. Call it Ms. Holland's Half-Court Press. 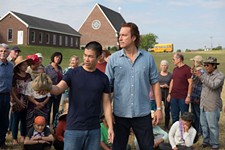 All Saints
Planting seeds to save a church