A Thin Line Between Love and Hate

The opening shot recalls Sunset Blvd.: a fully dressed man floating face down in a swimming pool as the voiceover begins to relate how this figure came to be in this sorry predicament. Before the movie ends, it's deep into Fatal Attraction territory, complete with one very crazy lady who will not be ignored. Martin Lawrence stars in this comedy thriller, which he also co-scripted and executive-produced. He plays a Romeo and budding nightclub entrepreneur whose smooth-talking insincerity with the ladies makes him a popular item until he lays his jive on the wrong customer -- an extremely unbalanced woman named Brandi, played by Emmy Award-winner Lynn Whitfield. Meanwhile, Darnell (Lawrence) also begins to develop a committed attraction to his old pal Mia (King), who has just returned from a military hitch with a newly found confidence and self-assurance that enhances her attractiveness in Darnell's eyes. Sexual stereotyping provides the grist for much of Martin Lawrence's humor and, for the most part, it's on target. Lawrence sets up the character of Darnell as a shallow ladies' man, only to knock the dude off his self-appointed perch and back into the real world. Unfortunately, it takes behavior as homicidally psychotic as Brandi's in order for him to be knocked to his senses. Extreme stereotypes are thus employed in the process of rooting them out and exposing them. Still, there are some good laughs in A Thin Line, even if the concept of “comedy-thriller” is a bit out-of-whack. The movie's pace frequently lags due to this switchover in tone, and could stand some general trimming. And, at the very least, we have one more film to add to the increasingly long list of movies named after popular songs, though the movie has only a tenuous (if any) connection to the song itself. 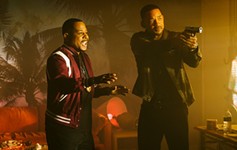