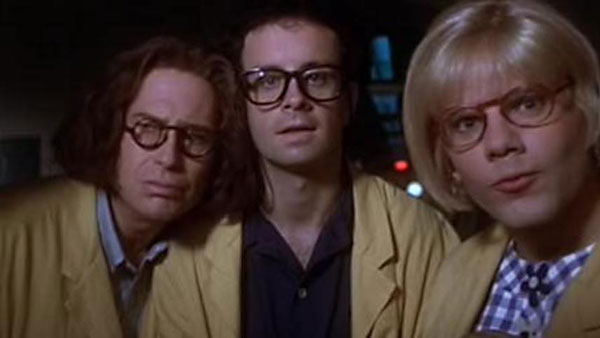 Kids in the Hall: Brain Candy

Eagerly awaited by almost everyone (with the possible exception of Paramount's head of marketing), Brain Candy is the first in a proposed series of feature-length comedies from the Canadian comedy troupe Kids in the Hall. An ensemble film in the same vein as Monty Python and the Holy Grail, this revolves around the performances of the five regular cast members, each taking on between five and six different roles. What there is of a plot concerns drug researcher Dr. Chris Cooper (McDonald), whose new anti-depressant, Gleemoxen, is pushed through to overnight availability to save Roritor Pharmaceuticals from bankruptcy. The drug, which works by isolating a patient's happiest memory and playing it back over and over again, appears to be a miracle cure at first, but then, of course, that's before the side effects become hideously apparent. As with any above-average Kids in the Hall sketch, the humor here derives not from the story (or lack thereof), but from the surreal, bizarre characters involved. There's Scott Thompson's Wally, a stunningly repressed gay man who denies his sexual identity even while masturbating to gay porn. McCulloch's Griva is the frontman for the heavy-metal group Death Lurks; he rails against the drug until it finally gets hold of him and results in a touching ode by the title of “Happiness Pie.” McKinney's Don Roritor, as the CEO of Roritor Pharmaceuticals, is a scheming, deluded corporate yahoo, whose last big drug, Stummies, is falling fast. And so on. There's plenty here for fans of the series to be ecstatic about, but Brain Candy still falls short of cinematic genius. It's like one long sketch that never seems to rocket off into the inspired heights of lunacy the series maintained so well. Cobbling together so many different characters (nearly all of them familiar to regular viewers) has left the Kids' feature debut as something of a letdown. We've seen it all before, and better, on HBO and Comedy Central. Like the mythical drug Gleemoxen, it's just too much of a good thing.