When a beloved Chicago archbishop is brutally murdered, celebrated criminal defense lawyer Martin Vail (Gere) pounces on the case. His client is Aaron Stampler (Norton), a 19-year-old runaway-turned-altar boy who was found fleeing the scene, covered in the archbishop's blood. Vail's adversary in court? Assistant State's Attorney Janet Venable (Linney), once Vail's “mentee” and his former lover. Based on the New York Times bestseller by novelist William Diehl, Primal Fear marks the first feature film from Gregory Hoblit, the accomplished television producer and director of NYPD Blue. With Primal Fear, Hoblit blends the grittiness of NYPD Blue with a fairly taut thriller that sustains its tension until the film's compelling final scenes. While Gere does his share of scenery-chewing throughout the film, stage actor Norton makes his screen debut with an incredible performance as the alleged murderer Aaron. His multifaceted role demands equal amounts of stammering vulnerability and unchecked rage, which Norton pulls off splendidly. As Vail's ex-lover and the prosecuting attorney, Linney brings an edgy wit to the role of Janet Venable. The film's finale caves in disappointingly with respect to her character, but Diehl's story provides other smart, savvy women in the characters of Dr. Molly Arrington (McDormand) and Judge Miriam Shoat (Woodard). Although Primal Fear dips dangerously into clichéd dialogue primarily via Gere's character, the film presents an interesting behind-the-scenes examination of a highly-charged murder trial and its equally high-profile defense attorney. The general theatrics of the film often pale in comparison to those in the courtroom. The film could do more with this exploration; one of Primal Fear's key scenes concerning legal ethics remains undeveloped, a strange twist considering the narrative's focus on these issues throughout the first half of the film. However, Norton's performance and the well-paced tension preceding the movie's climactic sequence provide an entertaining if slightly predictable thriller. And, with its focus on the Catholic Church and ethics in general, Primal Fear makes an interesting (if slightly twisted) viewing choice for the Easter weekend. 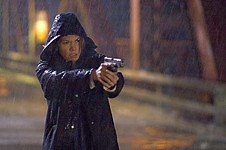 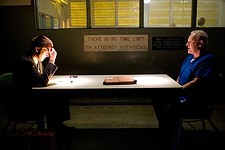