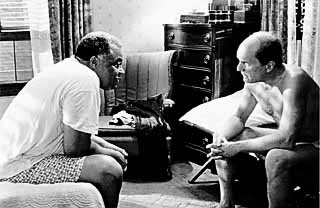 Picture this. A white man in his 60s, born and bred in Arkansas, learns on his mother's deathbed that she is not his biological mother. Not only is she not his “real” mother, but his biological mother was their black nanny, raped by his father. Earl (Duvall) is the result of this rape, and to add insult to injury, his biological mother died during his birth. She left behind not one but two sons, and A Family Thing by Richard Pearce (Leap of Faith,Country) tells Earl's story as he leaves Arkansas for Chicago in order to find his brother Roy (Jones), who is a retired Chicago police officer, and perhaps to make sense of a history he never knew. A Family Thing's well-intentioned script, co-written by Billy Bob Thornton and Tom Epperson, tries very hard to maintain a balance of humor and melodrama. Sometimes this works. With acting legends Duvall and Jones in the lead roles, the story stays afloat, but occasionally these actors seem to be lurching around in a script that's too “small” for them. At times the film seems only to be hitting its (often clichéd) marks as it traces Earl's treacherous arrival in Chicago, where he gets his car stolen by a group of black teenagers, to his inculcation into Roy's life and “their” family. The truly pleasurable moments in A Family Thing are often thanks to Irma P. Hall, making her film debut as the brothers' old Aunt T. -- blind as a bat but wiser than all of Chicago. “You were born out of wrong,” she says as she tells Earl the story of his birth. With her humor and wisdom she begins to close the gap between the brothers, allowing them to move beyond the pain in their family history toward an appreciation of their unusual family tree. Pearce and company keep the film open-ended, leaving Earl and Roy's story on a hopeful note. So, in spite of its sometimes lumbering script, A Family Thing definitely qualifies as the next feel-good movie of the Nineties.