Those rollicking French! Only a French director could explore sexual politics and the depths of romantic love with apparent ease, and only Josiane Balasko (Ma Vie est un Enfer, Les Keufs) could do so with an irreverence that cuts through much of the awkwardness and lends French Twist a humor bordering on the screwball. In addition to directing and writing the film, Balasko co-stars as Marijo, a butch deejay whose van breaks down in front of Loli (Abril) and Laurent's (Chabat) house. Marijo's request to wash her hands leads to a night of passion with Loli that neither woman wants to forget. Loli's philandering pig of a husband Laurent feels somewhat threatened by Marijo's butchness, but when he realizes his sexy wife has fallen for their visitor he loses total control. What ensues is an occasionally hysterical compromise among the three characters as they negotiate their feelings for one another. At first, Loli benefits from the combination of Marijo's devoted love and arousing sexual attention and Laurent's renewed interest in her. But a threesome is rarely the ideal situation, and Loli is forced to choose between the woman who satisfies her on multiple levels and the man with whom she shares a life and two children. The solution is predictably unpredictable, but Balasko infuses many scenes with ironic dialogue and the occasional touching nuance. Abril's Loli lights up the screen with the sexy humor present in many of her earlier films such as Tie Me Up! Tie Me Down! Chabat is convincingly self-absorbed and hypocritical as Loli's cheating spouse, and Ticky Holgado plays the perfect foil to Laurent as his partner and friend Antoine. Balasko's performance outranks her screenwriting; her face and voice express feelings in ways that few physical acts can. Fine performances aside, French Twist bounces across the screen so crazily at times that more substantial moments such as the final scene become lost amidst the chaos. While French Twist presents an often entertaining take on the traditional love triangle, some of its own twists could use more of a tweak and less of a laugh. 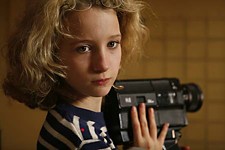 The Hedgehog
Eleven-year-old Paloma moves from girlish self-destruction to engagement with the world without ever leaving the confines of her French apartment building.