Angels and Insects, the new film from director Philip Haas (The Music of Chance), seeks to explore parallels between the societal structure of insects and that of human beings. The story, which is based on A.S. Byatt's allegorical novella Morpho Eugenia, details the emotional journey of William Anderson (Rylance), a poor but impeccably mannered naturalist, who marries into the wealthy, supposedly distinguished Alabaster family, only to slowly discover that his gorgeous new bride (Kensit) may not be everything she seems and that the pampered life he thought he longed for may not be his true desire after all. While the subject matter is, on a thematic level, never anything less than fascinating, it must be said that the picture, in many ways, falls short of being an effectively realized drama. The film, which is essentially about the dark underbelly lurking beneath the seemingly polite veneer of 19th-century Victorian society, simply spends far too much time contemplating that coldly artificial surface and not enough delving into the decidedly more interesting interior lives of the characters. With this in mind, it's hardly surprising that the film's most interesting performances lie along its fringes. Douglas Henshall shines in his debut performance as Kensit's wildly arrogant, possibly demented brother Edgar; Saskia Wickham makes the most of her brief screen time as the hauntingly disappointed Rowena; and Kristen Scott Thomas gives the film its best performance as the fiercely intelligent Matty Crompton, an arresting character who could have helped the movie with an increased presence. In fact, the picture improves greatly in its third act as it focuses more on Matty's budding relationship with Anderson and the analogies between the “primal” instincts of the insect world and society's “civilized” behavior become more pointed and less clichéd. And, although it has been foreshadowed almost to the point of predictability, when the perverse secret of the Alabaster household finally does come to light, the visceral effectiveness of the sequence is startling and finally allows Rylance and Kensit a chance to really cut loose in the acting department. Despite the strengths of these impressive moments, Angels and Insects can't really be called a great movie, but it is an intelligent, resonant story, not to mention a rich and rewarding, if flawed, piece of filmmaking. 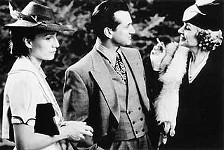 Up at the Villa
Visiting Up at the Villa is a pleasant enough experience, although you might find yourself wishing there were a little more activity happening on the ...