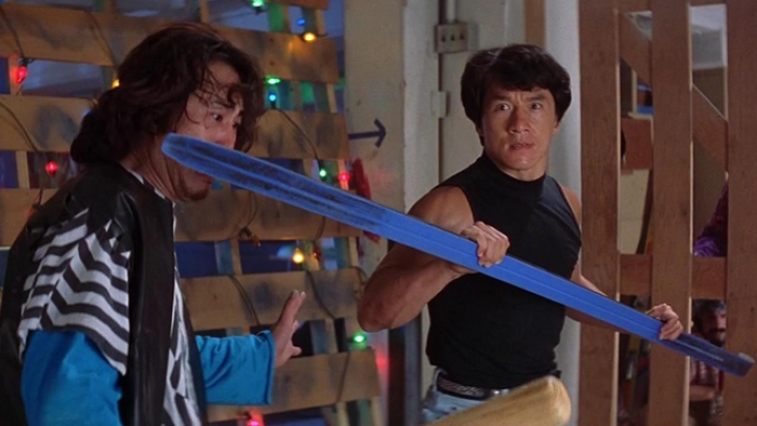 Rumble in the Bronx

One of the all-time highest-grossing films in its native Hong Kong, the Western version of Rumble in the Bronx comes to America with a virtual tornado of hype surrounding its incredible star, the celebrated action hero Jackie Chan. While not quite up to the standard of Chan's finest movies, Rumble in the Bronx is fast-paced, funny, and exciting, and should serve as a nice introduction for the uninitiated to the hyperactive world of Hong Kong action filmmaking. This time out, the threadbare plot finds Chan coming to New York to visit his uncle, who owns a grocery store smack-dab in the middle of a rough-and-tumble neighborhood in the Bronx. After suckering a plucky young businesswoman (the delightful Anita Mui) into buying the gang-plagued store, Chan's uncle quickly skips town with his new bride, leaving Chan alone to defend both the supermarket and its new owner from the violent troublemakers who control the area. Throw in romantic subplots involving a pretty gang-banger with a heart of gold, a bagful of stolen diamonds, and a group of killers posing as the FBI, and the stage is set for a lively, action-packed romp that, while certainly far from original or intellectually stimulating, dishes out the type of crazed stuntwork and brilliantly choreographed action that longtime fans have come to expect from Chan. The highlights are many, but two sequences -- a stunt-filled chase through a parking garage and an ingeniously staged fight sequence in which Chan utilizes couches, refrigerators, and pinball machines to great effect -- really showcase Chan's acrobatic grace and daredevil athleticism, and as a result, put Stateside wannabes like Van Damme and Seagal firmly in their place. There's also ample comedy on display, including a memorable episode with a two-way mirror and an unforgettable moment when co-star Mui, pushed to the breaking point after her supermarket has been demolished for the umpteenth time, throws a hysterical temper tantrum amidst the rubble. Still, Rumble in the Bronx has its share of problems, and they are hardly subtle: a paper-thin, why-bother story line; the smiley-face squalor of the Canadian locations which guilelessly try to stand in for the Bronx; and, last but most certainly not least, the sometimes unbearable, always absurd English dubbing. Despite the picture's numerous shortcomings, Rumble in the Bronx still packs more laughs and inventive action (When's the last time you saw a sword-wielding hero in a Lamborghini go head-to-head with a runaway hovercraft?) than most of Hollywood's jaded action product, and serves up a generous helping of shamelessly campy fun for unapologetic fans of body-slamming action and hopelessly silly comedy. 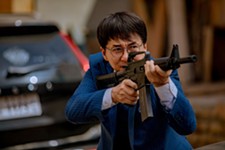