This movie is named Bottle Rocket not because it's about firecrackers or demolition experts or anything like that; the title is more evocative than descriptive. More than anything, the movie behaves like a bottle rocket, like one of those cheap, unpredictable firecrackers that nevertheless delivers proportionate bang for the buck. The making of Bottle Rocket is one of those rags-to-riches success stories that Hollywood these days likes to hold fast to its bosom. Beginning life as a 13-minute, black-and-white short film, copies of the tape fell into all the right hands and the rest, as they say, was serendipity. (See related story on p. 36 for the chronology.) Suddenly, these filmmaking novices from Texas had $5 million of financial backing to expand their short film into a full-fledged feature. What's remarkable about Bottle Rocket, the feature, is that it maintains the look and feel of a movie made for considerably less than $5 million -- or $5,000, for that matter. Sure, some of the film's new trappings have escalated beyond that which might have been provided by the creators -- a group of recent University of Texas graduates, friends, and siblings. Now also aboard were some seasoned professionals, including Robert Yeoman (Drugstore Cowboy) as director of photography, David Wasco (Pulp Fiction, Oleanna, Twister) as production designer, and Mark Mothersbaugh (Down on the Waterfront) as music composer. Certainly most visible amongst these additions are James Caan, who was humorously cast as the roguish Mr. Henry, and Lumi Cavazos (Like Water for Chocolate), cast as the Paraguayan love interest. Despite these upgrades, Bottle Rocket has a visually flat, shot-on-the-fly appearance that looks like anything but a finished studio product. As for story line… the plot is simply goofy. It follows the adventures of three friends and wannabe thieves whose enthusiasm outweighs their savvy. Dignan (Owen C. Wilson) -- ardent of heart, addled of head -- is the apparent leader of these hapless criminals. Bob (Musgrave) agrees to drive the getaway car so he can come along for the ride. Anthony (Luke Wilson) is Dignan's loyal friend and accomplice in their half-baked crimes until he's smitten with love and off in a new direction. Bottle Rocket's minimalist pop has a refreshing flavor but insufficient bubbles for a long, cool drink. Maybe someone ought to think about culling this thing down into a sustainable short film. 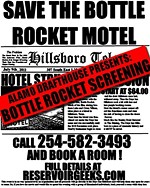 'Rocket' Away
How you can help save the 'Bottle Rocket' motel