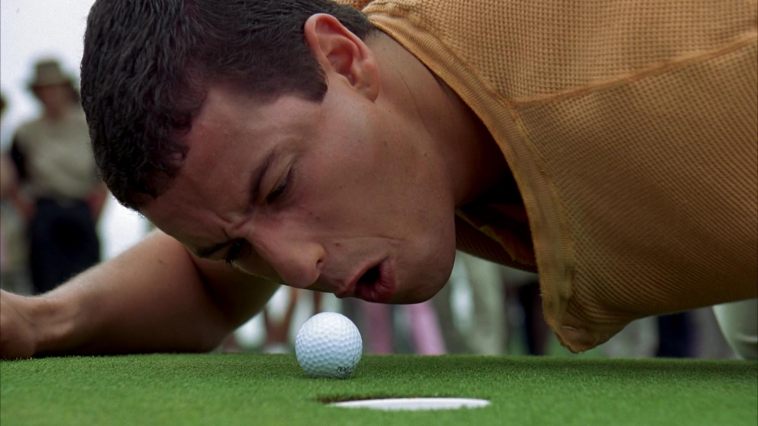 First Billy Madison, now Happy Gilmore. Yes, former Saturday Night Live cast member Adam Sandler continues his bid for big-screen stardom with this similarly titled, insipid film, which chronicles the misadventures of Happy Gilmore -- a wannabe hockey player-turned-golf wunderkind, who enters a number of tournaments in order to raise money to save his grandmother's house, which is in danger of being taken away by the IRS. The inane script, co-authored by Sandler with frequent writing partner Tim Herlihy, eloquently describes Happy as a "colorful, emotional, working-class hero," but, given his behavior in the film, he comes across more like a dim-witted, bullying pin-up boy for white-trash jocks. Admittedly, a couple of Sandler's golf-course antics are amusing, for example, his surreal mid-film fist fight with Bob Barker ("The Price is Wrong, Bitch!!!"), but most are just dull, unimaginative, and blatantly derivative, such as Happy's waterlogged punch-up with an alligator, a sequence virtually identical to, but not as funny as, the one in the recent Ace Ventura: When Nature Calls. Since so much of the film's action takes place on the golf course, it falls on director Dugan to visually spice up the rather uncinematic game of golf. But sadly, the man behind Problem Child and Brain Donors fails to do so, instead allowing Happy Gilmore to degenerate into a seemingly endless stream of boring club-swinging montages and golf-ball POV-shots, rendering the action repetitive and uninteresting. Luckily, the picture does have a few worthwhile supporting performances, from Carl Weathers (who, for some reason, gets a chance to croon “We've Only Just Begun”), Richard Kiel, and especially Ben Stiller, who shines in his all-too-brief turn as a sadistic nursing-home employee. Despite the efforts of these likable folks, there's just not much to recommend in Happy Gilmore, a lame, unoriginal comedy that may offer a few scattered chuckles, but more often than not, serves up a bewildering series of bizarre non-jokes, supposedly ironic product placement, cheesy music cues, and tired sight gags.