This juror's verdict on this preposterous new thriller is to lock it up for life and toss away the key. No mercy. At best, you could say that it's a competent presentation of a flimsy and unbelievable story. And while that may not be sufficient grounds for issuing a sentence of death, neither is it appropriate grounds for acquittal. Demi Moore plays a sculptor and single mom, Annie Laird, who elects to be empaneled as a juror on the trial of a Mob boss because she thinks it will be interesting and less boring than what's currently going on in her life. During the pre-trials, she admits to having no knowledge of this infamous defendant and to never reading the newspapers. Gosh, what a likable heroine. Like her or not, however, Annie is this film's Everywoman, a woman who becomes surprised when her son's life is threatened by Mob henchmen in exchange for her “not guilty” vote. Yet she is also a woman who faces the confrontation on her own terms, rejecting the protection of the prosecutor, who is played by Lindsay Crouse in what is unfortunately becoming a career of stern, business-suited mannequin roles. Threatening Annie is the “Teacher” (Baldwin), the Mob heavy who is equal portions of charmer, cad, and psycho. He is drawn to Annie because he sees them both as artists, she a sculptor and he a hit man. The Juror was scripted by Ted Tally, who previously adapted The Silence of the Lambs for the screen, so we might fairly expect that he knows a thing or two about menacing psychos. But the Teacher's dialogue is all standard-issue material and the only thing raising it above cliché is Baldwin's wicked skill as an actor. By the time this whole plot hollowly climaxes amidst the wilds of Guatemala, all you can wonder is how you might have better spent the last two hours. 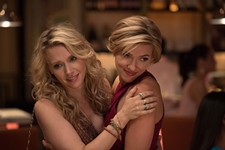