Based on the autobiographical writings of the late, gay author and artist David Wojnarowicz, Postcards from America is a memory play, a remembrance of how things past affect things present. The flashbacks of the protagonist's abusive childhood are theatrically staged, characters bathed in spotlights on a dark set; in contrast, the present is filmed in the bright glare of the desert sun. For the thirtysomething David, love is an elusive concept, one he never knew as a boy and, as a result, one he futilely attempts to comprehend as an adult. The love/sex conundrum haunts him: he hustles, he pursues anonymous sex, he objectifies physical pleasure. Postcards from America is potent stuff for most of its duration, a depiction of a lonely soul who is a stranger to intimacy. (After watching it, you may look at Wojnarowicz's paintings in a whole new way.) Screenwriter and director McLean demonstrates a distinct talent for evoking how human beings are shaped by experience -- sexually, socially, emotionally -- at an early age. His style reminds you of the British filmmaker Terence Davies, expressionistic and stark, albeit less so. It's only toward the end of the film, when AIDS intrudes into David's life, that the film begins to ramble, perhaps because the connection between the past and present becomes less attenuated. Until then, Postcards from America provides a compelling portrait of the artist as a young man. 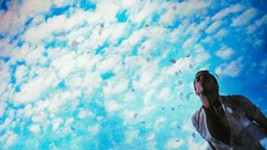 Poison
The Sundance Film Festival, that prestigious enclave of independent film juries, awarded Poison its top dramatic prize this year. But that distinction is hardly enough ...