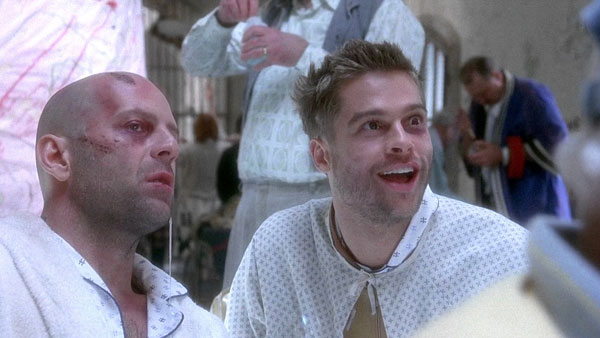 Terry Gilliam may be the most gifted cinematic surrealist since Luis Buñuel and, while his newest film fits more squarely into the category of science fiction than that of fantasy, his quirky, disquieting, and thoroughly unique vision is on full display once again. Virtually no one else could have made this film as well as he has (indeed, the thought of Twelve Monkeys falling into the hands of someone like Steven Spielberg is nearly as disturbing as the movie’s premise). Willis is James Cole, a seemingly deranged man who may or may not be an emissary from the future sent back in time to stop a deadly plague – possibly created by the mythical “Army of the 12 Monkeys” – that will eradicate 5 billion people in 1996. Confined in a mental hospital that makes Bedlam look positively cheery by comparison, Cole is watched over by psychiatrist Kathryn Railly (Stowe), who feels oddly drawn to this drooling, battered husk of a man. While there, Cole meets the raving, wild-eyed Jeffrey Goines (Pitt), who helps him escape before Cole seemingly vanishes into thin air. Cole’s search for the mysterious 12 Monkeys takes him in and out of various stages of madness? reality? some bizarre netherworld? Gilliam keeps the audience guessing, and in doing so creates a startlingly effective rumination on the nature of sanity and madness cloaked in the shroud of a sci-fi thriller. All three leads – Willis, Stowe, and Pitt – give painstakingly nuanced, wonderfully layered performances. Pitt effectively shelves the sexy bad boy image that’s made him a star and instead delivers a crazed, all-stops-out performance as the deranged Goines. Willis gives his best characterization to date, alternately heroic and pathetic, his doors of perception in dire need of a good greasing; Stowe is equally excellent as the rational mind fighting off the dark impossibilities hurled before her. Gilliam’s direction is, as always, a wonder to behold, cramming the screen with outlandish images simultaneously nightmarish and cartoon-like. It’s Hieronymous Bosch by way of Ren and Stimpy, a bogglingly eerie world where nothing is ever quite as it seems. Recurrent flashbacks throughout the film telegraph the ending a bit too much in advance, but that’s a minor quibble when held up against the mirror of Gilliam’s wild, wild ride. It often seems as though Gilliam is the least prolific of fantastic directors working today (with the possible exception of Alejandro Jodorowsky), but once again, it was worth the wait.