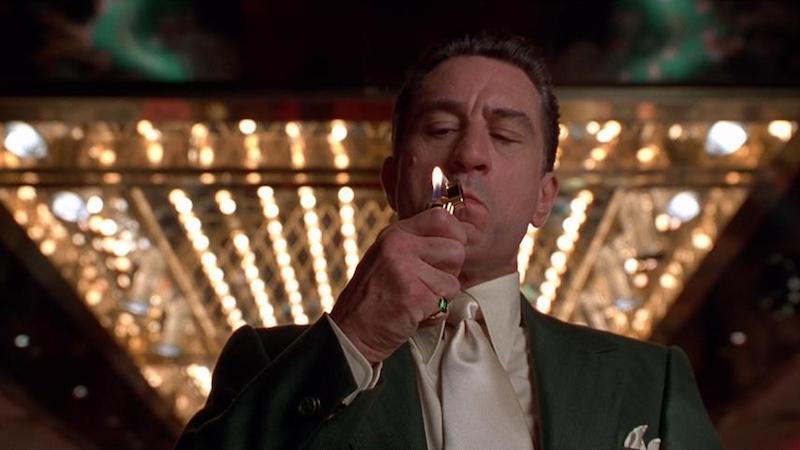 That Martin Scorsese is one of the modern masters of cinema is a fact that is reiterated through each of his movies. He always struggles to find new strategies for seeing beneath the surface of things and for new approaches to the telling of stories. Casino, however, cannot be viewed as one of Scorsese’s masterpieces. Yet, while certainly less than successful, I’m reluctant to call it a failure. Because, then, I’d have to revoke my love relationship with the film’s spectacular opening sequence (let’s just say it begins with a magnificent bang). The term “failure” would also negate the novelty of certain shots and scenes, like the overhead shot of Las Vegas that presents the city as a mecca of light in an otherwise barren sea of darkness. Leave it to Scorsese to expose the Vegas gestalt in a new and original manner. Eye-opening material like this is peppered throughout the movie. Then, of course, it is always a pleasure to watch De Niro at work, especially when at work in a juicy role like that of Sam “Ace” Goldstein, the Mob’s consummate bookie chosen by the bosses to front their “legit” Vegas casino. Believing in De Niro as a Jew is a bit of a stretch, however he’s good enough that you don’t dwell on how you can take the goy out of Little Italy but …. Better than watching De Niro work alone is the pleasure of watching De Niro working a scene with Joe Pesci, who is cast as Nicky Santoro, the New York muscle brought in to smooth over the casino’s inevitable rough spots. And to answer the question on everyone’s lips – Can Sharon Stone cut it? – well, yes and no. She fares better than any of her previous work might have led you to expect, but no one will ever mistake her for an acting giant. The problems with her characterization can largely be laid at the feet of Scorsese, a filmmaker whose body of work has never evidenced much sensitivity toward his female characters. For every Alice Doesn’t Live Here Anymore and Boxcar Bertha there are dozens of Johnny Boys and Travis Bickles roaming the Mean Streets, dividing women up into the virtuous and the fallen. Stone’s top-of-the-heap casino hustler could be a fascinating character, but in Casino she is simply there to be the object of Scorsese’s affections and subsequent scorn. The story is about what it is like for Ace living with her and living without her; not the other way around. Scorsese depicts the boys’ clubs, whether the movie is The Last Temptation of Christ, The Last Waltz, The Color of Money, Cape Fear or GoodFellas. And speaking of GoodFellas, that movie may just be the source of many of Casino’s shortfalls. Casino reminds you in too many ways of the brilliance of GoodFellas, and in a way that dooms Casino to remain in its shadow. It more than just the resonant re-pairings of De Niro and Pesci and novelist/co-scriptwriter Nicholas Pileggi and Scorsese. Structurally, it tries to ape the climactic build-up of GoodFellas, but never quite blasts off as the climax of GoodFellas so viscerally does. Casino never really seems to have a point, and in a movie just a couple minutes shy of three hours, that really becomes a palpable problem. As a whole, the movie does not crap out at the table, but neither does it come up with a fistful of dollars.