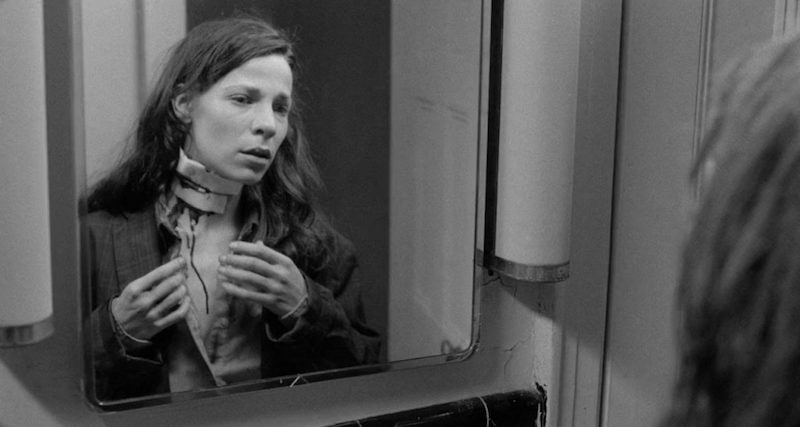 The movies of Abel Ferrara (Ms. 45, King of New York, Bad Lieutenant) are not meant to go down easily, and The Addiction is surely his most uncompromising effort yet. Shot for a small budget in stunning black-and-white on the downtown streets of New York City, The Addiction is clearly a movie that Ferrara urgently wanted to make. The movie tackles the topic of evil, presenting evil as an immutable force that is very much alive and ever-recruiting in our time. At the outset, the movie's opening images show us horrific pictures of the massacres at My Lai and the Nazi death camps as viewed by Kathleen Conklin (Taylor), a doctoral candidate in philosophy at NYU. Yet, The Addiction's brilliance and originality are due to its ability to bring the evil back home, back across the ocean and into the sorry hull of each individual human being. Evil persists because we allow it to… because we desire its offerings… because we allow it into our hearts every time we do not refuse its approach… because goodness cannot exist without evil. Ferrara's universe argues for a kind of lapsed-Catholic existentialism in which the act of being human absolutely requires a personal relationship with evil (we are all addicted), but the act of being human also means that our power to reject evil must overcome our impulse to submit. Mere silence or acquiescence is collaboration with evil and in this sense it becomes impossible to cite one individual's guilt for the My Lai massacre without also holding responsible an entire nation's addiction to its war machinery and combat mentality. The Addiction frames its unpopular philosophical premises within the guise of a generic vampire story. Here, the vampire's nightly need for blood is the addiction. In the larger sense, addictions are whatever gets us through the night: drugs, work, obsessions, The 700 Club, or whatever. Yet what really gets us through the night are our rationalizations; whatever props we use are merely the gauzy curtain that keeps the evil at bay and allows us to believe that we are doing “good.” Each time in The Addiction before a vampire goes for the jugular, the victim is offered an opportunity to “say no like you mean it.” The perpetual lack of resistance “causes” the bloody, vampiric holocaust of the film's climax. Ferrara's visual style is gritty, visceral, and energized by his rap-fueled soundtrack - a marked contrast to all the philosophical interjections of the characters. For these are characters who can quote extensively from Nietzsche and Heidegger or ask, during the middle of a tirade, if someone's read Naked Lunch. Philosophy is what these characters do, but never has it sounded more vital and relevant than when coming from the likes of actors such as Lili Taylor or Christopher Walken. At center stage throughout, Taylor's embodiment of Kathleen's increasing mental and physical decay rivet our attention like a stake through the heart. In all honesty, parts of The Addiction could stand some trimming while others might have benefited from a reshoot, but I find such distractions to be minor in face of the movie's monumental daring. Though ostensibly an urban vampire tale (in many ways, not unlike this year's other vampire original, Nadja), The Addiction is less a blood-sucking story than a fable about modern enervation. Not everyone will get off on The Addiction, but much like the aforementioned Naked Lunch, The Addiction renders with perfect clarity all that which we swallow. Siberia
Dafoe and Ferrara head to the frozen north