Mighty Aphrodite may take its thematic and structural cues from Greek tragedy, but it's second-rate Borscht Belt all the way. The story of a successful sportswriter who searches out the birth mother of his adopted son, a brilliant boy beyond his years, this is minor-league Woody Allen, a half-baked comic meditation on hubris that's partially redeemed by Sorvino in a performance as skintight as a pair of Capri pants. The one-joke premise of Mighty Aphrodite is in its clash of cultures: While Allen is predictably Upper West Side, Sorvino is as downtown as they come. A somewhat dimwitted hooker who moonlights as a porn star named Judy Cum, Sorvino's absolute lack of guile initially shocks Allen's sheltered sensibilities -- the f-word has never been so freely uttered in one of his movies before -- but he soon sees himself as her knight in shining armor, a savior bent on helping her find a good man and the good life. What motivates Allen's staid character, Lenny, to come to her rescue, however, is not so simple -- while arrogant pride has much to do with it, it's also that he's strangely attracted to this woman, both sexually and paternally. (Soon Yi comparisons, anyone…?) Where Mighty Aphrodite attempts to flesh out the relationship between Lenny and his wife Amanda (Bonham Carter), a troubled union in crisis that is inexplicably resuscitated in the last reel. (Bullets Over Broadway had the same rushed romantic denouement.) Maybe it's that everything else in this film can't help but pale in the brilliance of Sorvino's bright-light performance as a dim-bulb. The high-pitched voice and the go-girl appearance may strike you as if Judy Holliday were reincarnated. When Sorvino's onscreen, Mighty Aphrodite has a sweet punch to it, an attribute that Allen seems intent upon constantly undermining with narrative ploys like a real Greek chorus that comments on the plot's developments like a two-bit Catskill comedian. While some have judged that, in light of recent developments in his personal life, Allen has become morally bankrupt, Mighty Aphrodite is further proof that the bankruptcy may be artistic, as well. 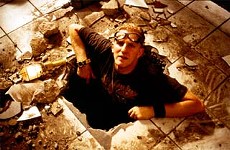 Small Time Crooks
Woody Allen returns to slapstick comedy in this new movie that's a throwback to the days of his early film features. With its story about ...