Adventure movies starring two adolescent girls are hardly commonplace and that, sadly, is virtually the only aspect of Gold Diggers that could be regarded as remarkable or unusual. It's a better-than-average kid's picture about the friendship struck between a newcomer and the town's teen outcast (whose community isolation, as we come to learn, is due as much to family turmoil and physical abuse as it is to the cruelties of peer pressure). Christina Ricci is the newcomer, Beth, who has just moved from Los Angeles to the bucolic Northwest. Anna Chlumsky is the outcast tomboy Jody whose plan to mine gold from Bear Mountain may not be as far-fetched as it seems. Her plan is based on the regional legend of Molly Maguire, a gold rush pioneer and escaped convict whose maps Jody has acquired. The girls bond and, in the course of events, come to save each others' lives. Through their loyalty and smarts, they expose the hidden violence inflicted by Jody's mother's boyfriend, they direct the sheriff through the steps of the rescue procedure, they pilot a boat, and discover the secret of Bear Mountain. Ricci (Addams Family, Casper) is a brilliant young actress and someone I'd pick as most likely to mature in the Jodie Foster mold of kid-to-grown-up stardom. Chlumsky's (My Girl) capabilities appear to diminish into the shadow of Ricci's orbit. Her adolescent awkwardness seems more a part of her own personal make-up than a part of the fictional Jody's. She makes you wish that she had learned more from those young Kristy McNichol tomboy roles than from her former co-star Macaulay Culkin. The adult performances are generally rudderless with Polly Draper especially seeming as if she were acting in some other movie. Australian director Dobson provides listless guidance and focus. Thus, while Gold Diggers is a movie that casts young girls in an encouraging spotlight, the fill light surrounding them is too faint and murky to create a completely satisfying composite. 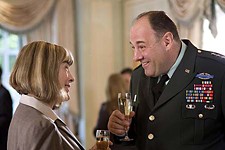