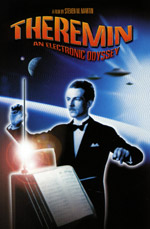 Some stories just write themselves. This fascinating documentary about the life of Leon Theremin is wilder than anything a storyteller might have imagined. The Russian-born Theremin was an electronics genius who invented the strange contraption that became the world's first electronic musical instrument. Named after him, the theremin is that eerie-sounding instrument that Hollywood has used to good effect for its ethereal ooooo-eeeee-ooooo sound. Brian Wilson used it, too, in the Beach Boys' “Good Vibrations.” The instrument is a device containing an electromagnetic force field that is controlled by the movement of a musician's hands which never touch the instrument itself. In 1922, Theremin demonstrated it in the Kremlin for Lenin. In 1928, Theremin sold out Carnegie Hall and became a New York celebrity. In 1938, he was kidnapped, presumably by the KGB, from his New York apartment and reports of his death circulated thereafter. But just as some stories can write themselves, other stories require detective work and research. Theremin: An Electronic Odyssey falls into the latter category as well. In recent years, Theremin was discovered by a reporter to be alive in Russia and director Martin tracked him down 1991 and sponsored the 95-year-old Theremin's return to the United States. It turns out that, after exiling Theremin to Siberian labor camps for “rehabilitation,” the Soviets had the electronics genius masterminding their Cold War eavesdropping equipment. Theremin's return to the New York City that he no longer knows is quite touching. He is also unaware of the huge impact the theremin has had on popular American culture. The filmmaker interviews a variety of people in telling this story: amongst them are Clara Rockmore, Theremin's protege and early paramour who still performs as a theremin virtuoso; Dr. Robert Moog, the pioneer of synthesized music who began his career building theremins; and rock innovators Brian Wilson and Todd Rundgren. Martin also makes wonderful use of performance footage, newspaper items, home movies, Hollywood movie clips, and posters to illustrate the tale. Theremin is a blend of great subject matter and a well-told story and, furthermore, proves that sometimes things are stranger than fiction.