If Roland Joffe's (The Killing Fields, The Mission) version of The Scarlet Letter had been updated as a pop musical, it would not have been more poorly conceived. This catastrophic conglomeration of Puritanical repression and modern sensibilities squanders terrific acting talent and sumptuous production values, not to mention a darn good story. One preposterous scene follows another, with absolutely mystifying results. We start off with the burial of Massasoit and the pyre-side condemnation of white men by his bitter son. Next we see a shining, expectant Hester Prynne (Moore) as she lands on the shore of the New World. She blows into the stultifying Puritanical town like a blast of Glade air freshener. In the first really silly scene, Hester abandons her plow work and follows a red canary (in Northeastern America??) into the woods. There she spies a young man cavorting in the crystal-clear water, his naked body twisting and glistening with each stroke, his long hair streaming behind him. Somehow, between field and stream, Hester has cast off her shoes and bonnet and donned in its place a wreath of bright flowers and her hair, too, streams behind her. After a minute, I get it -- these two will be attracted to one another! And so it goes with all sorts of trite, in-your-face symbolism, though, not all of it is quite so edifying. Why, for example, is Reverend Dimmesdale's sermon preached in a series of triple-echo incantations? Even Gary Oldman's compelling screen presence couldn't keep it from sounding like a chaplain trying to dispense a little fire and brimstone over a bad speaker system during half-time at a high-school football game. And his love scene with Demi Moore (which has all sorts of weird things going on with it, including a mountain of amber grain, a slave girl, and that pesky red bird) has a rendition in the next Naked Gun sequel written all over it. But Joffe's movie (and to be fair, we should name screenwriter Douglas Day Stewart as his cohort in crime) needs no such help. It is so bad as to be a parody unto itself. 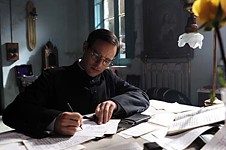 There Be Dragons
Roland Joffé wrote and directed this drama set during the Spanish Civil War in which one of the protagonists is Opus Dei founder Josemaría Escrivá.