The Mystery of Rampo

An affectionate, if macabre, love letter to the works of the famous and controversial Japanese author Edogawa Rampo, The Mystery of Rampo is an extraordinary picture that also manages to celebrate the rich legacy of the Japanese cinema. It recalls everything from the lyrical surrealism of Masaki Kobayashi to the delirious eroticism of Koji Wakamatsu (who, by the way, appears in a cameo) -- without ever seeming anything less than completely original. The plot finds the writer's most recently banned story incapable of suppression, as its events and characters come spilling out of Rampo's imagination and into his own reality. As his interaction with these characters increases, the more “reality” erodes, culminating with Rampo entering his own story in the form of one of his most famous creations -- a handsome sleuth named Kogoro Akechi -- in an attempt to save himself from his own creation. The highest-grossing film in the history of Japan, The Mystery of Rampo marks an impressive debut for director Kazuyoshi Okuyama, who, until now, has been best known as the producer of “Beat” Takeshi Kitano's brilliant Violent Cop. Here, Okuyama creates a far more satisfying blend of fact and fantasy than Steven Soderbergh's similarly themed Kafka, managing to capture not only the spirit of its titular subject, but more than willing to delve deeply into the man's complex personality (to ensure the picture's authenticity, Rampo's eldest son served as a consultant). Rampo's obsessions, visions, and stories are expertly realized by Okuyama through a dazzling array of special effects and hand-drawn animation and, though they are always spectacular, they are never gratuitous. Indeed, while there seems to be no end to Okuyama's and cinematographer Yasushi Sasakibara's bag of visual tricks, rest assured there's plenty of substance to accompany the movie's overwhelming sense of style. The performances are spare, but telling, Naoto Takenaka is a standout as the haunted Rampo, while Michiko Hada as the femme fatale and Masahiro Motoki as the dashing young detective share a hypnotic chemistry. There's little doubt that some will find the film's romanticized melodrama and unapologetic surrealism off-putting, but while The Mystery of Rampo may occasionally fail to “make sense” in strictly narrative terms, it always makes perfect “dramatic” sense. Beautiful, mesmerizing, and imaginative, The Mystery of Rampo is one the best films of the year. 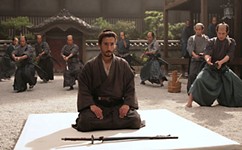 Hara-Kiri: Death of a Samurai
Takashi Miike remakes Masaki Kobayashi's 1962 film about a penniless samurai who commits the ritual act of suicide. 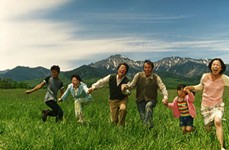 The Happiness of the Katakuris
Katakuris is something of a departure for Miike, seeing as how it's chock-full of robust romance and – we kid you not – musical numbers. While this is ultimately a crazy meditation on family values and the like, it's still mind-bogglingly goofy filmmaking, at once deeply moving and deeply annoying.