Strange days, indeed. It's 1999, the new millennium is just around the corner, and humanity -- more precisely, Los Angeles -- seems on the verge of a nervous breakdown. Police brutalize the citizenry, criminals run rampant, anarchy rules the street, the center cannot hold… the world is ready for its day of reckoning. Strange Days is film noir with a post-punk edge, a piece of pseudo-science fiction that -- despite its numerous flaws -- will get you thinking about the curse of memory and the preciousness of human experience. Its narrative is propelled by the day's new drug of choice, an unlawful substance that you neither smoke nor snort; rather, you live it. It's virtual reality with a twist, a high in which you feel every sensation and emotion felt by the person who actually experienced and recorded it: as the cliché goes, you step into someone else's shoes. Sold as “clips” -- CDs for the brain, if you will -- these technological cheap thrills are a hot black market commodity, merchandise which keeps the film's protagonist Lenny Nero (Fiennes) in business. Pitching his product as if he'd inhaled 10 cups of coffee beforehand, Lenny is not your everyday drug dealer: He's a salesman who genuinely seems to care about customer satisfaction. But Lenny is a pathetic man, despite his heart of gold, because he can't shake the memory of a woman who's left him. While he trades in the vicarious experience of others, it's his own experiences that he plays over and over in his mind, in a futile attempt to recapture what he's lost. Ever since the promise of her modern-day vampire fable Near Dark, director Bigelow has struggled to find a voice, always making intriguing movies whose sticking points preclude any resounding endorsement. Strange Days is no exception. Although there are some exhilarating moments here, they're offset by frequent distractions: Lewis' standard (and now boring) weird performance, an occasional lack of logic in the story line, a tendency to go operatic, and the overall feeling that the movie is unsure of where it is going. (The script's Rodney King-inspired MacGuffin is a disappointing dead end.) While Fiennes is oddly endearing in a role that might otherwise elicit less empathy, Bassett is left little to do but protect (and mother) him. She's much too arch, a criticism that recognizes how little with which she has to work. By the time New Year's Eve is upon the revelers in Strange Days and judgment day appears imminent, the movie takes a strange but compelling turn, revealing itself to be a love story at heart. It may strike you as a little incongruous, but go with it: After all, as some guy once sang, “2000 zero zero party over oops out of time.” 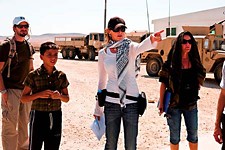 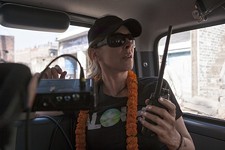 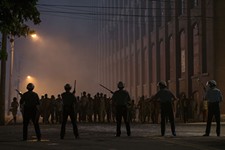 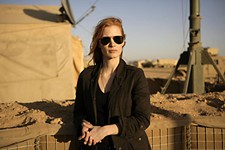