This is the type of movie where the title pretty much tells you all you need to know: If the very idea of going to see a movie called Shaolin Kung Fu Mystagogue doesn't automatically sound like a good time, then never mind -- this movie is not for you. However, if you're a fan of old-school chopsocky flicks and figure that anything with such a ludicrous title can't be all bad, then read on, because you're likely to have some fun with this one. Hsu Feng, the leading lady in many of legendary Chinese director King Hu's best films (including Dragon Gate Inn and A Touch of Zen), teams up here with muscular Carter Huang Chia-ta, a minor kung fu star probably best known for his role in John Carpenter's Big Trouble in Little China, to portray a pair of Ming dynasty patriots determined to protect an imprisoned Ming Prince, in addition to beating the stuffing out of as many Ching supporters as possible along the way. Opposing our heroes is a dastardly Ching spy posing as a monk in a Shaolin temple and armed with a pair of nasty, flying, spinning blades that can chop down trees… among other things. Made in 1975, this film's frenzied editing (although it can get a little too crazy at times, especially when mere frames are removed just to “speed up” the action) and trick photography anticipate the outrageous goings-on of more recent popular efforts like 1993's wildly energetic Butterfly and Sword, even if it looks positively primitive in comparison. For sure, there were far superior martial arts pictures being made at the time -- most of them by Lui Chia-liang or Chang Cheh -- but Shaolin Kung Fu Mystagogue is a decent low-budget effort that boasts a passable story and plenty memorable moments of gravity-defying action and fantasy (the villain's flying weapons and the deadly traps in the Ching headquarters, for instance, make a delightfully campy spectacle). No, it's not exactly Bergman, but if you enjoy this sort of thing, be aware that it isn't everyday you get to see it in the theatre, so don't miss it on the big screen, in glorious “hwakuo-scope,” while you've got the chance. 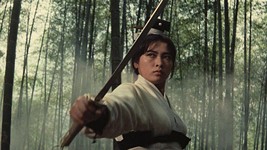