Perhaps it's only because both films are awkwardly titled and share in the presence of Whoopi Goldberg, but Moonlight and Valentino, more than once, brings to mind that other mainstream gal-pal picture of late, Boys on the Side. Certainly, it points out the rarity of commercial films that present male characters as figures existing in the stories' margins (or on the side), as mere plot devices in the narratives of heterosexual women. Moonlight and Valentino tracks the story of the suddenly widowed Rebecca (Perkins) and the three women who sustain her in her time of grief and adjustment. Her best friend and close neighbor Sylvie (Goldberg) is an eccentric artist and emotionally self-absorbed, but a comfort and a provider of laughter nonetheless; her sister Lucy (Paltrow) is a callow young woman still suffering from the death of their mother during the girls' childhood, yet also a fount of unconditional love and support for her older sister; her ex-stepmother Alberta (Turner) is an extremely successful businesswoman who foists her “take-charge” style on all her personal relationships, though it turns out that her actions are capable of yanking these women out of their morass. Each of these women has a fascinating story line and these actresses all do fine work adding depth to the characters. The problem with Moonlight and Valentino, however, is this multiplicity of story lines. Too many paths of emotional discovery are embarked upon without delivering any true sense of arrival or even destination. The movie was scripted by Ellen Simon, daughter of Neil, who originally wrote the material as a stage play which was based on her own life experience with widowhood. Too many story strands intertwine artificially. The script even underlines for us, in case we don't perceive it on our own, that these four women represent different stages of womanhood: the virgin, wife, widow, and divorcée. And in following the strict schematic of this story line, the movie loses some of the messiness that is so intrinsic to reality. However, any movie that matches these four powerful actresses with a sole male lead -- no less than rock star and untried actor Jon Bon Jovi -- is a movie that automatically captures my interest. Bon Jovi, it turns out, gets the role usually played by film bimbos: an incidental but physically arresting character who provides a diverting sexual encounter for the lead character. Nothing more, nothing less. If, like me, you find Moonlight and Valentino intriguing despite its shortcomings, you might want to check out Douglas Sirk's wonderful 1955 film All That Heaven Allows, in which a widowed Jane Wyman falls in love with her much younger gardener Rock Hudson. When Wyman's country-club set reject Nature Boy as unsuitable and her grown children want to disown her, Wyman goes into a tailspin from trying to fulfill all her “womanly” functions simultaneously and comes to an intuitive understanding of the constrictions inherent in the bourgeois patriarchy. 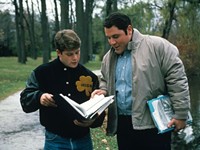 Rudy
The Hoosiers team (screenwriter Angelo Pizzo and director Anspaugh) regroup for another inspirational sports tale and, surprisingly, again succeed more than they fail. This is ... 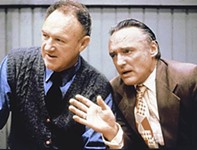