Snake in the Eagle's Shadow

Here's a silly bit of business that nevertheless holds a very important place in the history of Hong Kong cinema: It was the 1978 directorial debut of Yuen Woo-ping, who would go on to become one of the most important and consistent filmmakers working in the Chinese action cinema. It also helped to popularize the burgeoning “kung fu comedy” genre, and, most importantly, it managed to bring a then-little-known actor by the name of Jackie Chan to the public at large -- who has since, of course, gone on to become one of the world's biggest and most beloved superstars. This picture, Chan's first big hit, puts the engaging kung fu hero in his trademark role of the good-hearted loser who learns how to fight despite his overall lack of ability. And just as in Drunken Master, which is basically a better, streamlined re-make of Snake in the Eagle's Shadow, Chan's master is portrayed by the one-and-only Simon Yuen Hsaio-tien (Yuen Woo-ping's father and martial arts instructor), and their delightful chemistry here is every bit as much fun (and influential) as it was in the re-make. Veteran bad-guy Wong Jang-lee (also from Drunken Master) is on hand as a cruel master of the “Eagle Claw” fighting style, determined to wipe out the remainder of the rival “Snake Style” clan, to which Chan and his teacher belong, but beyond that there's not a whole lot of plot to chew on. While it's more or less acknowledged that in Chinese martial arts movies the plot is usually secondary to the physical action, there are a couple of moments in The Snake in the Eagle's Shadow that are a little too goofy for even my tastes -- like when the comic-relief preacher (Horan) turns out, in the film's final reel, to be a master fighter from Russia. However, despite its faults, Yuen Woo-ping and company do manage to pull off a number of thrilling fight scenes and memorable moments of physical comedy, and it is for these reasons that the picture is so fondly remembered by fans. For example, who could forget the tribute to Lui Chia-liang's seminal Dirty Ho, played out in the sequence when Simon Yuen Hsaio-tien manipulates Chan's limbs from behind, enabling him to beat up villains despite his lack of fighting skills; or the sublimely silly moment when our hero slides towels under the feet of a man trying to mess up the floor he's just cleaned? It's not every day that you get the opportunity to see a movie like this on the big screen, and for that reason alone, it's worth the effort for Jackie Chan fans to seek out this fun, near legendary chopsocky flick. 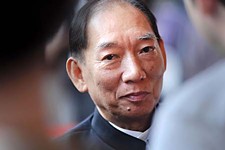 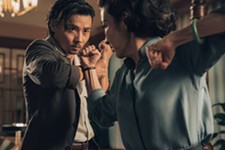 Master Z: Ip Man Legacy
Latest in the Ip Man series moves away from the Wing Chun legend himself 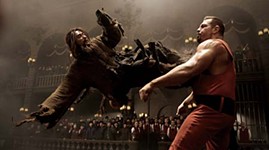