Young Steven Lidz (Watt) is baffled by some of the things that lately have been going on between his parents in his early 1960s Jewish household. Home life with his parents Sid and Selma Lidz (Turturro and MacDowell) and younger sister (Krull) had always been “different.” Sid is a scientist and an obsessive inventor whose elaborate creations and explanations sometimes overshadow the needs of his family. Sid and Selma are clearly in love with each other and their children, but it's Selma that Steven depends on for practical sustenance; his father he suspects is from another planet. But then Selma becomes sick with what the children are told is a bad cold but is really cancer. Sid, whose life credo is that nothing has been made that can't be fixed, is unhinged by his sudden ineffectuality in the face of cancer. Steven, as a result, turns to his even more eccentric uncles Arthur (Chaykin) and Danny (Richards) in his need for guiding influences. These two are certifiable -- Arthur a grown-up naïf who collects the lost detritus of the world and Danny a paranoid schizophrenic who everywhere sees anti-Semitic plotters and collaborators. Steven seeks shelter in the bizarre little world that constitutes his uncles' apartment and they take to calling the boy Franz Lidz. The heart of the movie is the funny and bittersweet story of this boy's coming of age. There's so much that I like about Diane Keaton'sUnstrung Heroes that I feel positively churlish about also having to point out some of its faults. Keaton remains behind the camera throughout. Her eye for the details is impeccable. All of the “stuff” that contributes to her images -- what hangs on the walls, the look of the house, the kitchenware, the costumes, the furniture, and so on -- is dead-on accurate. One of Keaton's great skills has always been her knack for accessorizing. And the script by Richard LaGravenese (The Fisher King, The Ref, The Little Princess, and The Bridges of Madison County adaptation) holds many marvelous moments and treats. Yet, it is also curiously wanting in some other ways. You can't help but want to know more about the background of these three eccentric brothers who can claim only Sid as the sane one amongst them. The movie makes us privy to various aspects and events in young Steven's life but none of them are sustained enough throughout to give us a sense of anything other than “Scenes from an Unusual Adolescence.” Some might find the casting of an unfledged actress named MacDowell to play a Jewish housewife in a period piece to be an example of Keaton's bold chutzpah; others may say it's plain meshuginah. MacDowell acquits herself decently, but hers is, nevertheless, an ebbing presence in the story. For once, Turturro has been cast as a romantic lead and it's clear that he's in possession of enough acting skills to move beyond his ghettoization playing edgy, unbalanced, ethnic types. One might, typically, have thought of Turturro to play the character of Danny, who is, instead, played by Michael Richards. Richards needed a stronger directorial voice that stopped him before his got too far into his routine mannerisms and eccentricities. Apart from the anti-Semitic paranoia, there is no qualitative difference between the character of Danny and that of Richards' stand-up persona or his brilliant habitation of the character of Kramer on Seinfield. Eccentricities, though they are essential to the story, nevertheless come across as too pat and planned in Unstrung Heroes. Despite my inability to dismiss the film's uncomfortable flaws, these were not so distracting that I had anything other than an enjoyable experience while watching the movie and was awash in a small puddle of tears at the end.

Lady Diane
Diane Keaton takes her life to the stage 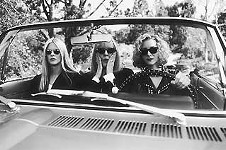 Hanging Up
So you young 'uns thought the changing of the generational guard (at least in pop-culture terms) was a done deal; that you'd finally escaped the ...