Magic in the Water

I once paid five pounds to work my way up numerous lochs to get to the most famous loch of them all. Squinting through the cold, misty Highland air, I scanned the flinty waters, searching for a sign of the murky monster. It was a magical, mysterious trip. Of course, I had worked my way through several hot toddies as well, so the most remarkable thing about the outing was that I didn't spot Nessie emerging from the shadow of Urquehart Castle. Unfortunately, I had no such fortification when I went to see Magic in the Water. This tale of two city kids taken on vacation to Glenork, in rural British Columbia, by their cellular phone-addicted, divorced dad is about as old as the Loch Ness legend. Young, lonely Ashley (Wayne) is befriended by Orky, the monster living in the hamlet's glacier-carved lake, after she feeds him Oreos. Orky is also fond of whooshing men off to his cave, from which they emerge reborn, with a sense of youthful joy and wonder that lands them in therapy groups. When Ashley's dad Jack (Harmon), a hyper-rational, speak by the numbers (“Three words: Get over it.”), talk-show psychiatrist is whooshed and returns with a penchant for orchestrating clouds and digging holes to China, the lonely, boring vacation starts to perk up. But Jack has been chosen (along with a mixed-nuts assortment of local townsmen) as a messenger from Orky, warning against the bad guys (two one-armed brothers representing the darker side of Doug and Bob Mackenzie) who are dumping toxic wastes into beautiful Glenork Lake. Deliberately (one hopes) derivative and not especially well told, the picture is not totally without charm: Two young anglers, their lines idle in the water, look on in bewilderment as bright, silvery fish leap into their canoe. A group of earnest Japanese scientists solemnly fiddle with the controls on their bright yellow submarine. And gorgeous Glenork scenery captured in a 1950s “Greetings from…” postcard look packs a nostalgic punch. But while it's amusing for the younger set, an adult outing to Magic in the Water, like my search for Nessie, might benefit from a few shots of magic water en route. 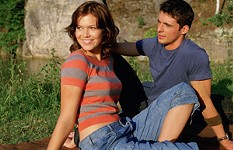 Chasing Liberty
A fictional president's daughter (Mandy Moore) skips out on her Secret Service minders (this doesn't remind us of any presidential daughters we know). 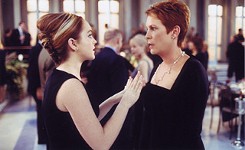 Freaky Friday
This remake of the 1977 Disney movie about a mother and daughter magically switching bodies for one day is better than you think it’ll be, ...