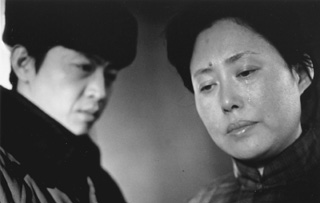 The Day the Sun Turned Cold

Based upon a true story, the exquisitely titled The Day the Sun Turned Cold is a wonderfully suspenseful drama that also pulses with emotional resonance thanks to the carefully measured performances of the cast and the thoughtful direction of celebrated Hong Kong filmmaker Yim Ho (Red Dust, King of Chess). The film tells the bizarre tale of Guan Jing, a young man who one day walks into his local police station and demands an investigation into the death of his father, who he believes was murdered by his mother 10 years earlier. Did she do it? Didn't she do it? To give away any more could quite possibly hamper the entertainment factor of the movie, even though Yim Ho is obviously far more interested in the emotional shock waves that are introduced into the lives of the characters following Guan's accusation. Thankfully, the talented cast is well worth this focus as each gives a performance of uncommon detail and precision. And although special mention must be made of Li Hu's turn as the cautious police captain drawn into the intrigue, the real triumph of The Day the Sun Turned Cold must go to Siqin Gowa (last seen in Xie Fei's Women From the Lake of Scented Souls) and Tuo Zhong Hua (Zodiac Killers), for their turns as the mother and son, respectively. Their complex, strained relationship not only serves as the heart of the movie, it allows for some of the most gripping dramatic moments I've seen all year, especially during the pair's final confrontation. With performances like these, coupled with Yim's flawless sense of atmosphere, The Day the Sun Turned Cold makes for great drama -- intriguing, involving, and unafraid to take its time (in fact, some tastes may find the movie too slow… so be warned). Due to its subject matter and themes, it will no doubt invite unfair comparisons with this year's Dolores Claiborne, but such analogies don't hold up quite so well when both films are placed side-by-side. Yim's movie offers up a much richer world view populated by a far more compromised cast of characters than Taylor Hackford's effective but simplistic, one-note feminism. Fans of gifted director Ann Hui (Song of the Exile, Love in a Fallen City) will be interested to hear that she is credited here as both executive producer and costume designer.