Choosing Patricia Arquette to play an American doctor grieving over the loss of her murdered husband and young son at first seems like a casting coup. Arquette is a hot property these days, and what a chance for her to range beyond the role she is most known for: the definitively white-trash, kooky hooker/wife of Christian Slater's character in True Romance. Unfortunately, Arquette isn't quite up to the challenge in Beyond Rangoon, Boorman's (Hope and Glory, Deliverance) take on the real-life saga of Laura Bowman in politically divided Burma in 1988. Bowman (Arquette) travels to Rangoon with her older sister Andy (McDormand), who hopes to distract Laura from her grief and nightmares. When Laura becomes separated from Andy and their tour group, she must make do on her own for a few days. She meets Aung Ko (Aung Ko), a professor out of favor with the dictatorship in power. He offers to take her on a tour while she waits for her plane, and through him she meets more liberals who support Nobel Peace Prize winner Aung San Suu Kyi (played by Lutz, a dead ringer for the real-life protester and heroine). When a crackdown threatens the lives of Kyi's supporters, Laura finds herself on the run with Aung Ko. Their desperate flight from the military police and their subsequent journey to the safety of Thailand across the river offer some compelling moments. Despite Arquette's inability to convince us that she is a doctor, the story itself, based on actual events, manages to keep our interest. And yet, the rather abrupt ending is a letdown. We spend much of the film witnessing Laura's descents into zombie-like trances complete with glazed over eyes, so her triumphant recovery at the end of the film (while normal for people experiencing the stages of grief) appears a bit too heavy-handed. Compounding the problem is a script the dialogue of which rarely stretches beyond Zen 101. With his impressive film credentials, Boorman is no slouch, and many of the film's weak areas seem to belong to Arquette. “Life is too strong in you,” Aung Ko advises Laura when she reveals that she wants only to die. Unfortunately for Beyond Rangoon, the life force in this film is not strong enough to resuscitate a weak script and an even weaker lead performance. 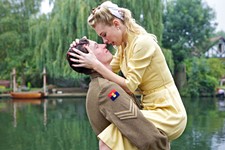 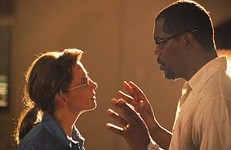