Never mind that the movie's plot is a tired one and that the script doesn't even try to re-work this particular genre's clichés... like Pfeiffer's B-Boy stance on the film's poster, something about Dangerous Minds just feels bogus. Perhaps it has something to do with the aseptic, TV-movie atmosphere that hangs over the entire production, or the way it asks us to buy the idea that old Bob Dylan tunes, karate, and candy bars are going to turn a bunch of hardened inner-city kids on to the joys of education. Although it's based on a true story, Dangerous Minds just doesn't seem to take place in the real world (the real LouAnne Johnson, who wrote the autobiographical book upon which this movie is based, has been fairly vocal in noting the film's numerous deviations from reality). Ultimately, the film seems more like an excuse to see how many times the filmmakers can manage to get Coolio's (admittedly catchy) “Gangster's Paradise” on the soundtrack than to educate or uplift potential viewers. As far as Pfeiffer's performance goes, she's got charm and pep to spare, but next to zero substance when it comes to exploring her character's particular hypocrisies and pretensions. About the only thing that keeps Dangerous Minds from being a total washout is the humor and energy of the young actors portraying Pfeiffer's students. They provide, almost without exception, nearly every single memorable moment in the film. But by the time the picture has entered its extremely weak third act, in which the whole enterprise glides toward a boring, predictable, and annoyingly cornball non-ending, even their collective appeal isn't enough to keep us interested. Needless to say, Dangerous Minds doesn't make the grade. 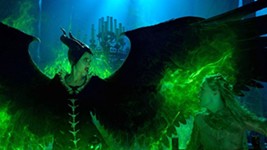