I once had a home economics teacher whose notion of culinary ingenuity revolved around the concept of a “basic dough.” This dough, so she said, could create a vast variety of cookies with minimal time and effort. All you had to do was “add your chocolate chips, your coconut, or your raisins and voilá!” The fact that they all had the same sweet, bland flavor and brown, shapeless appearance in no way mitigated Mrs. Huber's enthusiasm. They were quick, sweet, and easy. Who could ask for anything more? Bushwhacked is Hollywood's version of basic dough. The basic ingredients: the ordinary boy who has an extraordinary adventure, the bookworm who comes up with esoteric solutions, the fat boy who eats too much but is just a regular guy anyhow, and the runt who proves that the size of his heart is more important than the size of his biceps. Now, all you have to do is throw in a different setting. It could be (and certainly has been) a ball team, a summer camp, or, in this case, a scout troop -- specifically, six Ranger Scouts in search of a leader. Instead of the scaler of high mountains and forder of great rivers that they've been promised, they get Max Grabelski (Daniel Stern), an urban delivery boy whose leather jacket, Italian loafers, and Saturday-night swagger cut a foppish figure in the great outdoors. Max uses this mistaken identity to help him evade the law while he tries to find out who framed him for murder. The trouble is, of course, that he is stuck in the wilderness with a bunch of kids who expect him to know what he's doing. And the ensuing wilderness antics are, well, sweet, bland, and shapeless. And, considering the alacrity with which Hollywood is turning these out, apparently no one is asking for anything more. 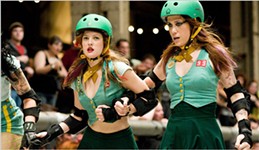 Whip It
Drew Barrymore makes her directing debut with this Austin-set story about the modern age of roller girls.

Home Alone
Home Alone is the apex, the pinnacle, the culmination of every bad bit Hughes has ever written or directed. It overflows with primitive, disastrously unfunny sight gags and neo-hateful familial humor.