(This is a reprint of the Austin Chronicle review that ran in March when this film premiered in Austin at the SXSW Film Festival.) The low-frequency radio transmissions constantly disrupting the soundtrack of Clean, Shaven are meant to get under your skin -- they're the sounds of a mind that's gone unhinged. In his startling, if somewhat uneven, directorial debut, Kerrigan has fashioned a tale of madness that is alternately creepy and sympathetic. As Peter Winter, the schizophrenic wanderer searching for the young daughter he lost years ago, Greene is eerily compelling; if eyes are indeed the windows to a man's soul, then Greene's haunted blue eyes in Clean, Shaven reveal the soul of a man in perpetual torment. (It's hard to believe that this is the same actor who played the sadist in Pulp Fiction.) The pace and detail here are strictly minimal, while the tone is unquestionably paranoiac. Some of the scenes in which Winter acts out his compulsions are bewildering and fascinating (covering and smashing windows and mirrors to avoid his reflection), while others are gruesome (the self-mutilation ritual of shaving and cutting body hair). At times, this is not a movie for the squeamish. Despite the assuredness of its unsettling tone, Clean, Shaven is a frustrating experience because its narrative is so purposely vague. Did Peter Winter really kill the young girl found dead midway through the film and, if so, why? Why is the police detective investigating the murder so obsessed with the crime? Just the electronic murmurings that permeate this film like so much psychological static, these and other ambiguities make this a difficult film to comprehend in any rational way. On the other hand, it's the elliptical nature of Clean, Shaven that makes it the compelling work it is. (Clean, Shaven debuted in Austin during the SXSW Film Festival.) 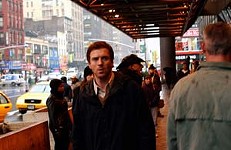 Keane
An unconventional psychological thriller without much plot, Keane is the gripping and uncompromising story of a man's attempt to hang on to his sanity.