The Incredibly True Adventure of Two Girls in Love

At first glance, the plot of Incredibly True Adventure couldn't be more prosaic; teen love traumas are a film industry staple and our familiarity with their formulas are a given. It's senior year of high school and two teenagers fall in love. They love in the way that all first-time lovers do -- for always and forever. Randy's skin is white and Evie's skin is black. Randy likes loud rock music; Evie prefers classical. Randy gets around by skateboard; Evie drives her own Range Rover. And, oh yeah, they're both 17-year-old girls. Randy is an out-of-the-closet dyke who lives with her lesbian aunt and her aunt's lover. She's flunking classes, working a duller-than-dull gas station job, and is quite unpopular at school. Evie lives with her single mom, a wealthy professional who travels frequently. Evie has just broken up with her boyfriend, is a model student, and popular with her peers. She doesn't know if she's a lesbian or not but she does know that she's in love with Randy. Incredibly True Adventure tells the story of the relationship between these two girls and the social, racial, and sexual storm it sets in motion. Yet the tone of the movie remains lighthearted and funny, and even dips into farce before the movie's ambiguous close. The story is standard teen fare; only the protagonists are new. Yet new protagonists can also generate new narrative conflicts, possibilities, expectations, and resolutions. This is made clear in the film's opening shots. The first image we see is that of two pairs of feet entwined; one set's donned in work boots and coveralls, the other set is bare but for high heels and an ankle bracelet. Automatically, we assume this is an image of a man and woman locked in embrace. After a few further shots of the couple's upper bodies, we can see that these lovers are two women. From the outset, Incredibly True Adventure declares its intention to subvert traditional conventions and expectations. But in the hands of debut feature director Maggenti, subversion becomes the epitome of fun. Furthermore, in terms of feature films containing lesbian thematics, Incredibly True Adventure breaks new ground in comedy. This humor may take the form of a visual punchline as described above or the farcical anarchy that dominates the movie's last third. But the humor is the spice that makes this Adventure addictive. Maggenti has found a key to inventing film stories that use the familiar structures of the past to chronicle the present and envision the future. Incredibly True Adventure premiered in Austin earlier this year at the SXSW Film Festival. 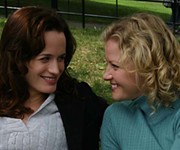 Puccini for Beginners
A lesbian on the rebound falls for both a guy and a gal in this rom-com with roots in old Hollywood screwball comedies.