By what justice can Steven Seagal, an absolute unknown until just a few years ago, claim to be a major movie star? As a screen persona, he's a no-talent, badass bully. In his directing debut last year with On Deadly Ground, he proved he was about as longwinded and pointless as that relation who's always avoided at every family gathering. His success is our doing. His action movies make gobs of money and only we can cause that to change. Under Siege 2 provides helpful incentive; it is so bad and illogical that even devoted loyalists should find their faith tested. The subtitle Dark Territory doesn't even begin to describe how inchoate and blemished this storytelling is. All activity is fashioned with one objective in mind: how to introduce Seagal into the scene so he can kick, whump, stomp, detonate, and, basically, humiliate every bad guy in the hemisphere before eradicating him forthwith. In Under Siege 2, Seagal reprises his character of Casey Ryback, a cook and an ex-Navy SEAL. The mere mention of his name is enough to get heads at the Pentagon and NASA nodding with confidence. Why not? Ryback's a one-man show. Typical of his bravura style, he, literally, takes on a whole trainload of bad guys this time when (and I don't think I'm being nitpicky here) it would have been so much more effective to hop off the train and gather the cavalry. What he's doing on the train in the first place is a pitifully thin story line which leads to further moments of illogic rather than clarity. In one of the year's most unlikely bits of casting, Eric Bogosian, the noted monologist, plays the deranged villain who commandeers the train as a post from which to kidnap the satellite he once invented. Bogosian has turned into a look-alike for Elliott Gould and appears to have the ability to berserkly chew scenery while Seagal darts about doing his bully-boy thing. At times, you suspect the whole project has taken a few tips from the Leni Riefenstahl school of filmmaking, a style that venerates spectacle regardless of substance. I could go on asking questions like why there's a woman in the bathroom fixing her lipstick while she's being held hostage- but in this direction lies certain madness. However, there are two further things I must mention: Ryback's new sidekick and comic relief character Bobby (Chestnut) plays into some of the most deplorable black stereotyping I've seen in a while. He's a shuffling fraidy cat who jokes his way through the crisis and can't keep his mind on the task at hand. Something tricky is also going on with the film's print ad campaign which poses Ryback in his Navy whites, an image we see only in the film's closing shot. The rest of the time, he's the man in black, all black: black shirt, black jacket, black pants. Never mussed, never bloodied -- not starched Navy whites. What, exactly, are they trying to sell with this ad campaign? Do we care? Just say no. 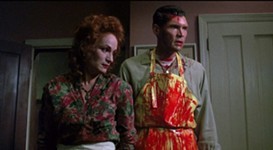