Coming hot on the heels of both Rob Roy and Braveheart, the clumsily titled First Knight is the third in this summer's sword-swinging sweepstakes as well as the umpteenth retelling of the legend of Camelot. In the end, this picture seems to have more in common with the ho-hum swashbuckling of Kevin Reynolds' Robin Hood: Prince of Thieves than the truly mythic feel of, say, John Boorman's Excalibur. This time out, the story pays particular attention to the relationship between Lancelot and Guinevere and how their forbidden love more or less destroys the legendary King Arthur and almost manages to ruin the city of Camelot. Despite the sweep of the story, First Knight feels like a would-be epic; in other words, it seems small: cramped, crowded, and unsure of itself. Perhaps it's the cluttered frame compositions or the below-average special effects work that give off this impression but, more likely, it has to do with the fact that former ZAZ (David Zucker/Jim Abrahams/Jerry Zucker) collaborator and Ghost director Zucker may just not have been ready to take on a project of this size and scope, although his ambition is admirable. To be fair, Zucker occasionally shows the right touch -- examples include Gere's playful run through a deadly gauntlet and Ormond's drink of rainwater that has been filtered down to her by Lancelot through a series of tree leaves -- but more often than not, his direction lacks confidence. His actors are equally scattershot: Gere surprisingly displays a fair bit of dashing grace in some of the action scenes (which, unfortunately, look quite primitive when placed next to the aforementioned Braveheart) but has trouble maintaining a consistent accent. Ormond delivers a serviceable, if undistinguished, Guinevere, with some of her reaction shots prompting unintentional laughter. And although putting Connery in the role of King Arthur may seem like “can't miss” casting, he too disappoints. Personally, I believe that it would be next to impossible for Connery to deliver an out-and-out bad performance (hell, just the very presence of Sean Connery inspires greatness), but I think it is safe to say that he didn't give this role his all. His performance is a perfect metaphor for the whole film: It's not that First Knight is a terrible, embarrassing piece of junk; it's just a film of stunning averageness and not really good or bad enough to make any kind of a lasting impression which, depending on your point of view, may be even worse than a total failure. 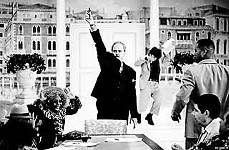 Rat Race
Why some Paramount production executives thought that now was a good time to revive the big-ensemble chase comedy formula is anyone's guess. It's a mad, ...