Those viewers only familiar with the recent action fantasies of prolific Hong Kong director/producer Tsui Hark may be slightly taken aback by this 1995 romantic epic of his, which is an elegant retelling of the classic Chinese tale Liang Shanbo and Zhu Yingtai. This story has been adapted for the screen at least ten times previously; the most popular version is the 1963 Cantonese classic Love Eterne. Carefully walking a line between joy and tragedy, Hark's picture is a strange combination of sexual-identity comedy a la Yentl and romantic tragedy a la Romeo and Juliet. The story follows the adventures of a carefree young woman named Ying-Toi who disguises herself as a man in order to attend college and further her education (women are forbidden to attend, of course). Once there, she forms a friendship with Leung San-Pak, who is a spirited, hard-working, young male student, and their friendship eventually blossoms into a full-fledged romance, which leads both parties to question their emotions and sexual orientations. While these aspects are commonplace in the gender-bending genre, Hark's view is substantially richer, using the sexual-identity crisis as a way of satirizing male bonding and the mistreatment of homosexuals, as well as examining the similarly confused politics of ancient China. The tone changes from light to dark during the film's second half, as Ying-Toi is forced into a prearranged marriage and all hell breaks loose, building to a surreal finale where the harsh realities of life give way (in true Hark fashion) to a supernatural fantasy world where the dead speak, the earth and weather seem to have lives of their own, and love conquers all. It's all terribly melodramatic, but the direction and performances are so heartfelt (I'll take newcomer Charlie Young over Anita Yuen any day) that one can't help but get wrapped up in its delightfully corny spell. By the time it's over, The Lovers succeeds as both a beautiful love story and a powerful, resonant melodrama. Both supporting actress Carrie Ng, who plays Ying-Toi's icy mother, and music composer James Hong walked away with Hong Kong film awards for their contributions to this film. 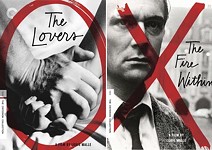 The Lovers & The Fire Within
Louis Malle, lobbing smart bombs