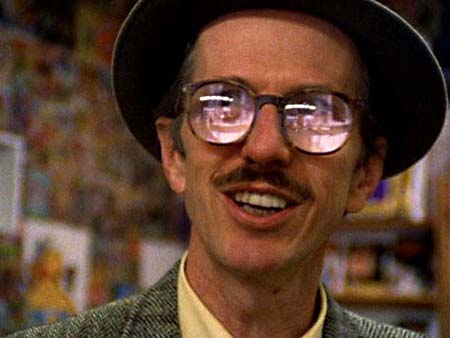 R. Crumb: master cartoonist of the underground comix world. Even if you're not familiar with his name, I guarantee you're familiar with some of his images. In fact, that's how this documentary starts out, with Crumb caustically reviewing his most famous creations: the ubiquitous Keep on Truckin' guy, the ever-randy Fritz the Cat, and the sensational album cover for Janis Joplin's recording debut, Cheap Thrills. The movie tells us a lot about Crumb's artwork -- about its style, its history, its roots, and its repercussions. Though Crumb is packed with information and telling details, the movie's objective is hardly art history or a survey of Crumb's place in the world of comics. The movie aims for broader subject matter, to discover something about the role art plays in the life of the artist, and about how the release of art may, indeed, allow the artist to function as a stable human being. Filmmaker Terry Zwigoff, who has known Crumb for over 25 years and has played music with him as a member of the Cheap Suit Serenaders, shot the film over the course of six years. Zwigoff takes an intimate look at Crumb's visual output and probes the artist with questions. Other perspectives are also gleaned from interviews with various other personalities: interviewed are fellow cartoonists Spain Rodriguez, Bill Griffith, and Trina Robbins; art critic Robert Hughes; Crumb's wife and fellow cartoonist Aline Kaminsky; Crumb's son from a former marriage, Jesse, who is himself a burgeoning artist; ex-wife Dana Crumb; various old girlfriends; various women who endorse Crumb's self-exposure of his sexual obsessions in which the only well-rounded women are ones with outsized upper and lower decks; and various women, chief among them former Mother Jones editor Deirdre English, who deplore his depiction of women as convenient docking stations. But even more than all this, Crumb is about the Crumb family, a unit that also includes a mother, vestigial traces of a deceased father, two brothers, Charles and Max, and two sisters, who declined to be interviewed. Much of the interview time is spent with the three brothers, often in the house they lived in as children. This is a necessity for Charles, whose inability to leave the house is one of the manifestations of his schizophrenia. Despite his mental trauma, Charles is quite funny and articulate and was the first of the Crumb kids to start drawing cartoons. He got all his siblings to join him in this endeavor and the results were quite elaborate and well-organized. But then he stopped drawing and, later, stopped going out altogether. Brother Max also grew up to become an artist. In between his painting sessions, he sits on a bed of nails in his threadbare apartment. Max also speaks of his occasionally acted-act desire to molest women. It's at moments like these that Crumb becomes truly fascinating -- when it's exploring the chicken-and-egg conundrum. Which comes first: the art as a thing unto itself or the essential need to expunge visions from the brain? Can art be a buffer between sanity and the abyss, can it expiate all our ugliness within, can it instigate its own path of madness? In Crumb, we have three brothers whose early art experiences were similar, but who all grew quite differently. For R. Crumb, art-making may be his redemption. 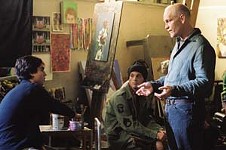 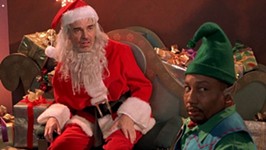