Here is a movie that knows its target audience. Pocahontas' arrow, tipped with tender romance and feathered with spirited folklore, hits the bulls-eye dead on. If you can get past the frenzied hype of a Central Park happening and a liberal license with historical accuracy (and I challenge you to show me a 7-year old who can't), this latest Disney effort rivals the animated features from the fabled studio's heyday. Like the best Disney cartoons, Pocahontas is both resplendent and restrained. The rousing action sequences are brief but compelling counterpoints to the beautiful simplicity of the piece. The animation is wonderful. The human characters, especially, are skillfully drawn, full of subtle nuance and graceful movement. Pocahontas is lovely and while the animators have succumbed to the modern day heroine's seeming requisite -- impossible Barbie doll physiology -- they have also imbued her with a spirit so innocent and a bearing so noble that it precludes a too-lascivious allure. The characters are nicely vocalized, the studio scoring a magnificent coup with Russell Means' portrayal of Pocahontas' father, Chief Powhatan. He and Irene Bednard bring to life the warm relationship of a father and daughter whose mutual love and respect gives them strength and compassion and a great capacity for listening to, and learning from, one another. Mel Gibson (John Smith), as it turns out, can carry a tune, and what tunes he gets to carry! Composer Allen Menken (The Little Mermaid, Beauty and the Beast) is back, and his music lifts the movie to lofty heights. Unlike so many film composers of late, Menken knows when to keep quiet and when to let loose his powerful score. That power soars through its centerpiece (and no doubt Oscar-bound) song, “Colors of the Wind,” performed by Judy Kuhn. In that splendid musical sequence, Pocahontas takes Captain Smith on a whirlwind tour of her land, introducing him to her people's way of living in harmony with nature. As she sings, she becomes part of the wind, a pastel image at once ethereal and earthbound. And, at the final refrain of the song, a soft, reedy chorus rose up around me -- a theatreful of equally ethereal voices. Voices of little girls who, on this Saturday morning, were rapt passengers on a magical voyage painted with all the colors of the wind. The New World
Instead of a great story about the conflicted origins of the American nation, Terrence Malick interrupts his transcendental observations for a dopey love story between John Smith and Pocahontas. 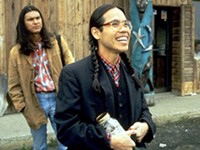 Smoke Signals
This voyage of discovery based on Sherman Alexie's novel tells a story about friendship and father-and-son knots among Couer d'Alene Indians, a tale that resonates on the reservation and off.