Burnt by the Sun

Set against the backdrop of the Russian countryside under Stalin's rule, this Oscar-winner for best foreign film is a brilliant, Chekhovian meditation on trust, love, and the intrusive horrors that period of time brought to otherwise normal families. It's 1936 and retired military hero Serguei Kotov (director Mikhalkov) is enjoying the warm, restless summer with his extended family at their dacha just outside Moscow. Into this postcard-perfect picture of lazy familial bliss steps an outsider: Mitia (Menchikov), a long-lost family friend and, unbeknownst to Kotov, the former lover of his young wife Maroussia (Dapkounaite), who appears in disguise at first, taunting the household with rude and lusty exhortations about their various vices. Once the charade is revealed, though, Mitia is welcomed with open arms, although the purpose for his sudden and entirely unexpected return remains unknown. As Kotov's relationship with his wife begins to show some strain, he stumbles across the truth of Maroussia's former relationship with Mitia, which naturally sets off a series of emotional fireworks between all three. Meanwhile, the visitor has become increasingly and unpleasantly close to Kotov's six-year-old daughter. Family members -- not the least of whom is Kotov himself -- are beginning to suspect that there is more to Mitia than they suspect. Mikhalov's film moves in and out of so many different emotional levels so fluidly, that when the worst finally comes, you barely notice it, as though it had been there all along. Mikhalkov's portrait of a Russian family circa the mid-Thirties is obviously heartfelt and touching in its pleasant ordinariness. Everyday actions take on a shimmering golden glow here; family baths, dinners, and verbal sparring flow so naturally through this film that it's almost as if someone had taken a home movie of your old-country grandparents. Add to this heady brew Mikhalkov's surreal (and occasionally mystifying) use of film symbolism, and you have one of the most interesting, and engrossing, Russian films in years, one that runs the gamut from love to hate to fear and back again, all of it presided over by the omniscient shadow of Joseph Stalin. 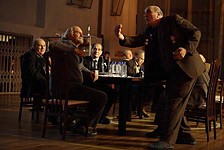