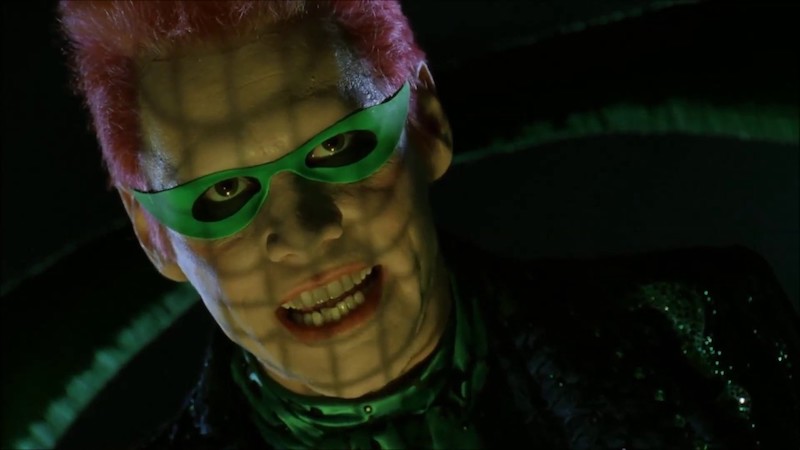 Batman forever… and ever… and -- yawn -- ever. This third installment in what, previously, was a deliciously gothic take on the Dark Knight drags on interminably, filled to bursting with all kinds of spectacular, violet-hued explosions, pithily cumbersome one-liners, and enough ham-handed psychotherapeutic explanations for Batman's noblesse oblige -- from Nicole Kidman, no less -- to choke Freud for days. Director Schumacher, taking the reins this time from Tim Burton, who instead fills in as producer, is, of course, an old hand at cinematic bombast, having churned out such previous exercises in aesthetically void sound and fury as Flatliners and The Lost Boys. Batman Forever is no exception to his personal rule of film as cultural static: There's so much and so little going on here simultaneously that you're not sure whether to squirm or doze. Finally, MTV has been topped. Kilmer, who replaces the genuinely interesting Michael Keaton as the caped crusader, has little of the manic, psychologically warped gleam that his predecessor brought to the role. Instead, he plays it for cheap laughs, spouting a veritable fusillade of wry tidbits that sound as though they were culled directly from some aborted Bruce Willis vehicle. Screenwriters Lee and Janet Batchler forsake the more adult-oriented aspects of the first two films (not to mention the story itself, if you're in the mood to quibble about trivialities), and instead head directly into territory staked out by the campy Batman television show of the mid-Sixties: All that's missing is the cartoony “Pow!” after every well-connected punch. Jones and Carrey -- as Two-Face and the Riddler, respectively -- are the film's saving graces, as villains are wont to be in this sort of adolescent exercise. Carrey positively thrives in this sort of role; he's inherited the same twisted, everything-and-the-kitchen-sink comic glee that older members of the audience will recall from Robin Williams' glory days. His Riddler is a whirlwind of absurd posturings and fevered, maniacal obsessions; Frank Gorshin's TV portrayal seems pre-Cambrian by comparison. Jones does his best to keep up (no mean feat under all those layers of shoddy latex scar tissue), but it's Carrey's show all the way. When he's off the screen, the film bogs down in Kilmer's bland surfer-boy good looks, Kidman's preposterous (and marginally offensive) sexual high jinks, or O'Donnell's “Origin of Robin, the Boy Wonder” subplottings. Holy story line gone awry, Batdude! Even the most inspired use of the word “bifurcated” I've ever heard in a motion picture can't save this molten chunk of pop-culture cheese-whiz from sinking under its own ridiculous weight. Batman forever? Does that mean Jon Lovitz as Egghead next time around? Sandra Bullock as Batgirl? Better stop before I give Joel Silver any ideas.