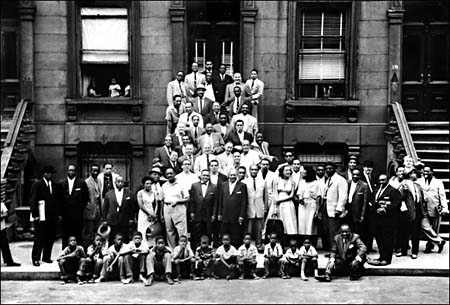 A Great Day in Harlem

This hourlong documentary is the story of a photograph: a fascinating story about a fortuitous moment frozen in time, a moment that innocently bares the bedrock of an era, a transitory moment that now can become a fertile doorway. Fifty-seven New York City jazz musicians gathered for this photograph which was shot one summer morning in 1958 on the steps of a brownstone on 126th Street. The movie tells the story of how such an unprecedented number of jazz notables assembled on this particular day at 10am (an ungodly hour for any working musician) to record the image. The movie also uses this photograph as a stimulus for anecdotal reminiscences by the surviving musicians. These contemporary interviews cover the individuals’ memories of the event, as well as their free-ranging thoughts about the styles, habits, contributions, and innovations of their friends and fellow musicians. It’s like one big, tasty jazz alphabet soup or as Stephen Holden put it in a New York Times review, the photograph is “akin to a jazz version of Proust’s madeleine.” From these interviews with people such as Dizzy Gillespie, Art Blakey, Sonny Rollins, Marian McPartland, Horace Silver, Gerry Mulligan, Art Farmer club owner Bud Freeman, and others, insights are offered about things as various as the differences between the styles of Coleman Hawkins and Lester Young, the talent and breakthroughs of Mary Lou Williams, the genius and intrinsic morality of Thelonious Monk, the not-forgotten brilliance of Red Allen and Rex Stewart, the prediction that in 100 years Pee Wee Russell’s clarinet style will be better remembered than Benny Goodman’s, and succinct comments such as Bud Freeman’s remark about Count Basie, “Everything he did swung.” The photograph was, originally, the idea of then Esquire art-staff member Robert Benton (later to become a writer and film director: Nobody’s Fool, Places in the Heart, Kramer vs. Kramer) for a January 1959 issue celebrating jazz. Freelance art director Art Kane was hired and an open invitation was extended to jazz musicians throughout New York to assemble at this certain time and place. Everyone was surprised by the big turnout and the gathering grew into a nearly unmanageable event that took the inexperienced and awed young Kane at least a couple of hours to shoot decently. Other images of the event were captured by stride pianist Mike Lipskin and by Milt and Mona Hinton who brought an 8mm camera with them that morning. These images are also used to amplify other angles on that frozen moment in time. Outside footage is also used to provide examples of individual music styles and history. Constant samples of music riffs embed the storytelling in an ever-changing background of jazz sounds. The copystand camerawork that animates the still images is about as fluid and expressive as I’ve ever seen. Curiously, A Great Day in Harlem lists no single individual as director, seeming to favor recognition of the collaborative efforts of the core production group spearheaded by self-confessed “jazz groupie” Jean Bach. Sometimes, the movie’s freewheeling narration feels scattered as it jumps from one topic and personality to another. Though a more associative order might benefit the film, its randomness does not impede its understandability and, in a sense, it’s true to jazz’s improvisatory nature. Within the constraints of its one-hour running time, this movie packs numerous lifetimes of tidbits. A Great Day in Harlem is the story of a shot that ought to be heard around the world.